“It was a good experience,” Kelsey said.

“We were able to see what goes on in the Upper House and Lower House, and even though we didn’t understand everything they were saying because of the codes they use it was interesting. We were also shown about Government House.” 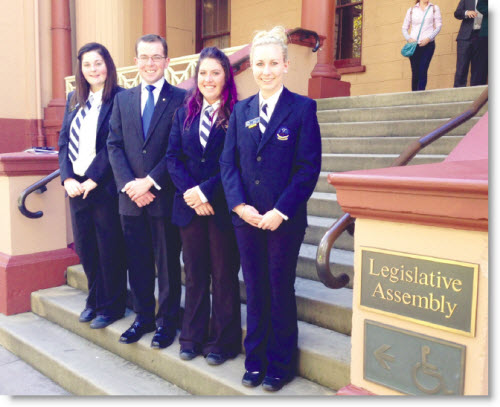 During their time in Sydney the girls met with NSW Governor Professor Marie Bashir and Northern Tablelands MP Adam Marshall, who played host to the leadership trio, as well as Principal, Mark Vale.

“Gabby, Lucie and Kelsey were exceptional ambassadors for their school and it was a pleasure to have them in parliament and personally welcome and mention them in a debate on the floor of Parliament while they were in the public gallery.”

Mr. Marshall said the student leaders, together with their colleagues from schools across NSW, began the day listening to addresses from MPs before quizzing them on the life of a politician.

“This program provides students with the opportunity to meet their elected representatives and to develop their knowledge of constitutional and parliamentary proceedings including the role of the Governor and the workings of parliament.”

“It was wonderful to met Gabby, Lucie and Kelsey and I hope they enjoyed their time visiting the ‘people’s parliament’ learning about parliamentary proceedings.”

The girls were part of a group of 15 students from this area and others from across NSW who travelled to Sydney for the event.

Mr. Marshall met the girls again when they made their debut at the ball on Saturday night.