A large crowd of parents and community members were on hand to witness the induction of the Bingara Central School 2012 Student Representative Council last Friday week. Also attending the ceremony were representatives of the National Servicemen’s Association, who also took part in the induction.  The induction ceremony was chaired by Mr. Bernie Cavanagh, head teacher of Secondary.

An apology was received from the Member for Northern Tablelands, the Hon Richard Torbay MP, who sent a message of congratulations. “Student Representative Councils provide an important experience for students prepared to undertake a leadership role within their own school communities,” Mr. Torbay said. “It is easiest to stand back and let others make the important decisions, so I have great admiration for those people who willingly step forward and take on responsibility. “I wish all the student representatives an enjoyable year ahead and thank them for being positive role models for their peers,” Mr. Torbay wrote. 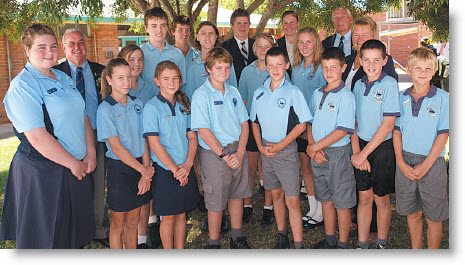 Principal, Mark Vale said the 2012 SRC members are off to a good start and are achieving good things through their leadership. “Their cup cake fundraiser for Ovarian Cancer was a great success for a very worthy cause and their planning for a student social is something that will benefit all students. These are examples of what can be achieved through student leadership.

“I am looking forward to working with this group of student leaders to make Bingara Central School an even better school. “In particular I look forward to them playing a significant role in the establishment of our PBL (Pride, Respect and Honesty) program leading up to the launch later this year.

“Our PBL values provides great mantra to us all and particularly the SRC as they demonstrate their endorsement of these values in the way they have presented themselves today and I am confident in their actions in the future,” Mr. Vale said.

Mr. Vale thanked the Nashos for their continued interest in the Bingara Central School.