Bingara children get a taste of cricket 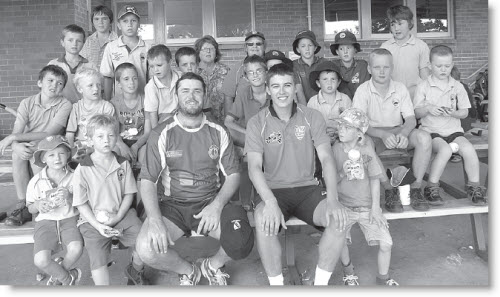 Coaches Tom Groth and Stuart Plant with some of the children who took part in last Wednesday’s coaching clinic. Also in the photograph are Mrs. Groth, who also helped, and Ms. Barber.

Under the leadership of cricketers Stuart Plant from the UK, and well known cricketer Tom Groth, and development manager from Tamworth, Kathy Barber, the children honed their batting, catching and fielding skills with some drills followed by games of diamond cricket for the younger players, and continuous cricket for the older children.

Ms Barber told the Advocate the day was a great success.

“Our objective is to engage the students of Bingara Central, and that’s been really fantastic, thanks to Tom Groth and Stuart Plant for encouraging the kids to participate,” she said.

“What is really exciting is the number of parents who have engaged in conversation about cricket in the future, that is been really, really positive.”

Following the success of the Come and try day, Cricket NSW extended the program to run for another three Wednesday afternoons, from 3.30 to 4.30 pm.

“What we are looking for now is a couple of local young cricketers, guys who might be interested in coming along and supporting us, with a view to running it in the future,” Ms Barber said.

“With community interest we have seen today, particularly from the kids, perhaps we can get someone local who is interested delivering a program for us. We have a group of Mums and Dads who are prepared to help the oversight of it, we just need a program deliverer.”

Such a person does not necessarily have to be a parent, just someone interested in being involved in supporting the children playing cricket.

After the now four week cricket program, it will be football season.  “We hope in term 4 to get junior cricket up and running in Bingara,” Ms Barber said.