Mrs. Pattie Steiger, together with friend, Jenny McGowan, knowing they would miss the Anzac services decided to social-distance in the driveway of Pattie’s home.

They followed the order of service, using a previous programme from the Bingara RSL. 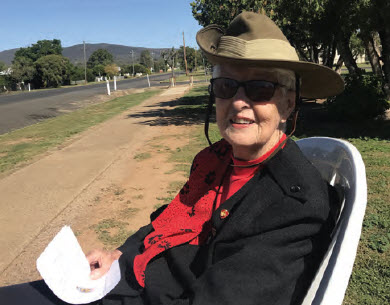 Passers-by joined in waving and pumping car horns, to show their respect.

At the conclusion, a friend Shirley Witts, fittingly, originally from New Zealand, joined in singing the Maori’s farewell, bring back fond memories of her homeland.

Pattie has sung the National Anthem for the Bingara RSL on countless occasions over the years, and of later times ably assisted by Rick Hutton.