Bingara residents, assisted by Warialda people, have collected more than a quarter of a million eligible drink containers since the Return and Earn scheme began in December last year.

“Last week, we hit 250,000,” owner of Bingara IGA and Hardware, John Bishton, said. “Some of the good folk from Warialda have been helping us out by bringing their containers for recycling,” Mr. Bishton said. That equates, in a population of 2,500 people, to 100 containers per person.

Recyclers can drop off their containers at Bingara hardware seven days a week and pick up the cash refund the next day.

“We do have a few rules,” Mr. Bishton said. Boxes and bags must be clearly labelled. “Also, please pick up your empty bins or bags when you get your refunds.” If, after 30 days, a refund has not been claimed, the cash will be donated to the Westpac Rescue Helicopter Support Group. 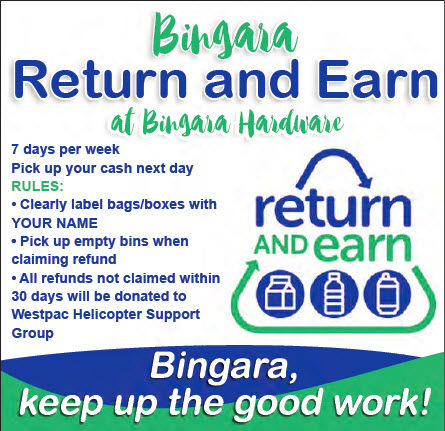