The Bingara Historical Society Heritage Walk was officially launched at the opening of the Orange Festival Carnival on Saturday 26th June. The project initially began back in April 2013 when the Historical Society decided to put a proposal to Council to assist in installing picture boards and plaques showing the history of business premises along Maitland Street, Bingara. 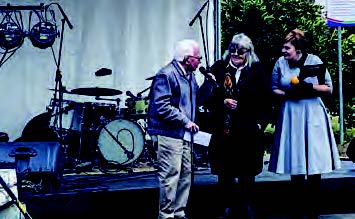 His research began, the task soon became more substantial than first provisioned for. Several deadlines were extended, and responsibilities redeployed as Historical Society members moved on.

Society member, Mr Ted Sparke, headed the project and says that there was a multitude of contributors who were extensive in their contribution. “Secretary Kath and Stella Carnal designed the No 1 plaque, which was placed on the lawn at the front of the Bingara Museum,” he said.

“President Jane Connolly (Oliveri) did hours of computer work setting out the original drafts, which went on public display in the dining room at the Bingara Showground in November 2014.”

The Orange Festival seemed the perfect occasion for the opening of the Walk, and a presentation was made to Ted Sparke for his tireless research into the history of the buildings in Maitland Street, Bingara.

Council staff have assisted the Historical Society to complete this project and tourist brochure has been compiled to provide guidance of the location of these signs. Brochures are available from the Museum and Visitor Information Centre.

The Heritage Walk runs along Maitland Street starting at the Museum.