Mr Marshall said this funding would be matched with contributions from Gwydir Shire Council ($10,000), Cricket NSW ($12,000) and the Bingara District Cricket Association.

“The Bingara nets are in a pretty ordinary condition and becoming unsafe for cricketers,” he said.  “Likewise, the ageing synthetic turf at Warialda and Warialda Rail is in need of replacement.  With more than 150 players in the district now, cricket is taking off again and our local cricketers need appropriate and safe facilities to play and train.”

Mr Marshall said the new nets would help train local and representative players, as well as keep visiting teams in form. He said that with the upgrades, Bingara and Warialda could look forward again to being a cricketing hub in the New England North West region. 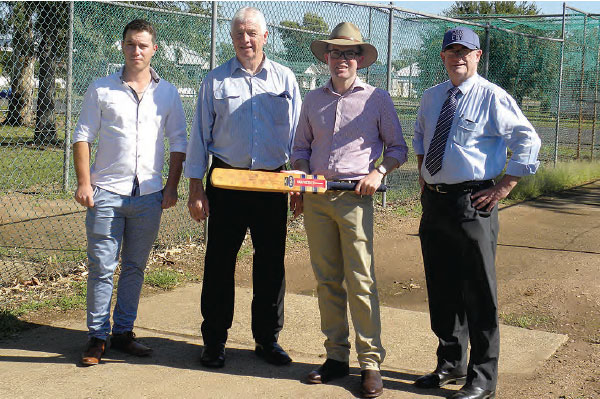 It’s been a big 12 months for the cricket association, having recently installed a multi-sport scoreboard at Gwydir Oval, and the representative side making it through to the finals, an impressive feat for the teams fourth season after a 20-year hiatus.

Bingara District Cricket Association President Justin Hellmuth said the current facilities are currently tough to play on.  “The pitch has been better – there’s a big burnt patch in the middle and it’s got a big dip – so this will make it easier for our rep games and teams,” Mr Hellmuth said.

Mr Hellmuth says the Gwydir Oval serves as a meeting point for many teams from around the region.  “Our representative team will be able to practise in a central location – they come from Barraba, Warialda, Upper Horton and Gravesend. In addition, the local teams will finally have a proper place to practice – at the moment it’s just concrete, and balls keep getting torn up.”

Justin said that Association Secretary, John Sullivan and Carmen Southwell from Gwydir Shire Council had put a lot of work into the project.  “It will be good for the district, especially with the representative team, having a central place to train, hopefully we can win the grand final next year.  It will be good for the younger fellows to train for the Bingara side to have a decent place to train.”

Justin said the existing nets would be completely removed and new nets, similar to new nets at Warialda, will be erected.

The memorial will be respected.

John Sullivan said he was ecstatic to see the funding announced.  “It took a while to go through all the hoops, but we got there.  So now the hard work begins, with all the voluntary labour, but we will coordinate that.”

Voluntary labour will be used where possible, although some of the jobs require special expertise, in particular the laying of the synthetic surface.  A company which did similar work in Narrabri will be engaged to do that.

Mr. Sullivan said he expects work on the nets and the cricket pitches to begin after Easter.  Because the synthetic is between the two football fields, its position will not be an issue.