It was many hands ‘on deck’ at the Bingara hatchery on Saturday morning, when 28,000 Yellowbelly fingerlings were ‘branded’ for future identification. 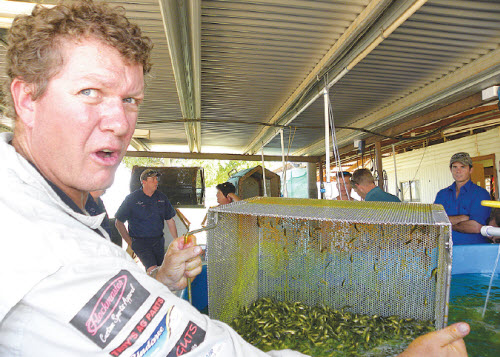 Matt McLellan (pictured above), Senior Fisheries Manager from Narrandera, travelled to Bingara to give the little fingerlings a bath in calcein marking dye before they were released into local rivers and dams.

Also in attendance were representatives from the Dutton trout Hatchery at Ebor, who observed the operation, and may be called on in the future to help the Bingara hatchery team.

Hatchery committee members, Stuart Lanagan, Stan Fletcher, Brian Riley and Steve Apthorpe recently attended a Department of Primary Industries course at Tamworth to learn about the process, and put their skills into practise, helping Matt with the task of treating the fingerlings.

“The day went pretty well, we will have to do the calcein marking ourselves in the future, so it was interesting to see firsthand how it is done,” Stuart Lanagan said.

“The DPI have done extensive studies to make sure the meat is not affected by the calcein.”

There was a strong turn-out of keen anglers at the hatchery on Saturday, all willing to help with the project.

“The committee we have now is pretty dedicated, we don’t want to see this shut, it is too much of an asset to the town,” Stuart said.

He expressed a wish for measures to be put in place to address the problem of cold water pollution, as this adversely affects the little fish.

“You don’t want a big rush of cold water now, it would probably kill them,” he said.

“It has been very successful, we got 28,000 fish to release into the river. We are very happy with that,” Andy said.

Matt McLellan was impressed with the dedication of the hatchery committee.

“It is really positive, great to have so much involvement from the local community and some really keen volunteers,” he said.

“The fish are brilliant; some of the best yellowbelly fish I have seen for a long time. I would be proud to call them mine!” From three to four thousand fish are treated at a time, in a process of osmotic induction.

They are first put into a strong salt water solution which dehydrates the fish. After three and a half minutes, they have a quick dunk into fresh water then into the solution of calcein, a fluorescent dye which marks the bones.

Because the fish are dehydrated, when they go into the calcein, they suck water back into their bodies to rehydrate. When they do that they bring the calcein dye in with the water.

“The calcein leaves a mark on their bones, so scientists can come back in the future and catch these fish, and take a sample of the bone and put it under the microscope,” Matt explained.

“They usually take otolith which is like an ear bone, the otolith actually has growth rings on it, so they can count how old the fish is, and if it has a mark, they will know it comes from a hatchery. All this is going to give them information for when they are doing projects regarding, for instance, environmental water, so they know if the fish is a result of a natural spawning or whether the fish are coming from stocked fish. It helps with the management of the fish and the fishery.”

All of the fish that are stocked in the Murray Darling basin this year from public, private and volunteer hatcheries are all going to be marked with calcein.

“It is quite an extensive program, which will be ongoing for up to five years,” Matt said.

“We are also looking at different ways of marking with DNA, potentially we can move to something like that in the future, it would be much easier for us and other hatchery operators. We would just need to get a fin clip from the brood stock then put that into a DNA data base and see the progeny of those adults that we have collected,” Matt concluded.