Riders from throughout New South Wales attended the State Showriding Championships at the Bingara Showground on the first weekend of December.

The young riders and their support crews rolled into town on Friday and set up camp at the showground. 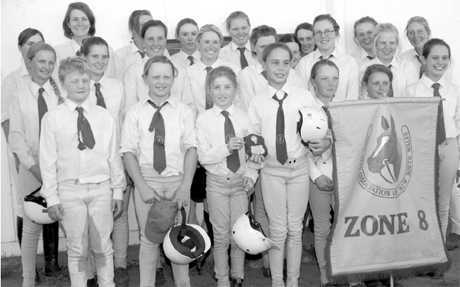 Zone 8, the local one,  got off to a good start by winning the Best Presented award at the Zone Parade which opened the event.

On Saturday, The Advocate spoke with Chief instructor for NSW, Jenny Frankum, who had travelled from Camden for the weekend. “The weekend is going very well, and we got through the classes early,” Mrs. Frankum said. “The local people have done a great job in difficult conditions.”

Bilsborough’s bus was organised and kept very busy taking children and adults to the pool and bringing them back to the showground. “That was very good and very thoughtful,” Mrs. Frankum said.

The 210 entries came from as far as Milton on the south coast, the Southern Highlands, west to Zone 4 which takes in the Nyngan area, and Zone 9, the Port Macquarie area. The only part of the state not represented were the Albury and Griffith areas.

The Showriding Championships have been running for four years, and provide an alternative to the Showjumping, eventing and campdraft events which have been available at a State level for many years.

Mrs. Frankum said the event was proving very popular and gaining numbers each year, catering for riders who don’t want to jump or sport.

Injury free weekend
Mrs. Frankum said on Saturday that only a couple of riders had ‘slid off’ their mounts, and there were no injuries.

On Sunday, although the organisers provided plenty of water, some of the riders suffered dehydration, but there were no injuries.

Bingara Pony Club officials were pleased with the weekend, and received many favourable comments about the facilities at the Showground.