Members of two former Bingara families and Bingara residents gathered at the small park at the corner of Maitland and Finch Streets, for the unveiling of two silhouette statues honouring two men who both had a long and dedicated careers caring for the health of people in Bingara. 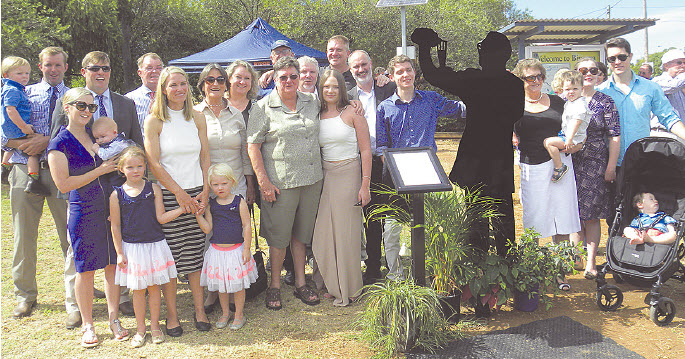 The event was organised by a committee of the Bingara Lions Club headed by Judy Adams and Lions President Ian Grieve and involved the whole of the Lions Club.

After entertainment by Jamie and Joe Lanagan, MC Rick Hutton welcomed the crowd and spoke about the two men.

Dr. Frank Hollinshead bought the medical practice in Bingara in 1946. The year before he had been here as a locum for Dr. Steinberg. He practised medicine in Bingara until he retired in 1987, and died in 1994.

Bill Bullough and his wife Alice moved to Bingara in August, 1945 and served at the towns chemist for 44 years. Mr. Bullough died in 1996.

Also included in the program were short stories about Dr. Hollinshead and Mr. Bullough, read by Bingara Central School students.

A short biographical story about each of the men was read, the first delivered by Nicola Hardy, granddaughter of Dr. Hollinshead, who prefaced her speech with an amusing tale about visiting her grandparents when she was a child, and how her grandfather had found Nicola and her sister listening at the door of his surgery.

Nicola told the crowd that Doc. flung open the door holding a large syringe, enquiring who was next.

His granddaughters, needless to say, scattered!

In his time at Bingara, Dr. Hollinshead delivered 2000 babies in Bingara, he was also an excellent surgeon, anaesthetist, and could deal with a wide range of ailments, not always in what would be considered a conventional way. But they worked, as many people in Bingara can attest.

MC Rick Hutton called for a show of hands of people who were delivered by Doc. Hollinshead.

Many hands, including those of Bill Bullough’s three daughters, and some of their children, shot into the air.

A tribute to Bill Bullough was read by his eldest grandson, Douglas Doyle.

Mr. Bullough was awarded the McCrory Medal for dispensing at the completion of his pharmacy degree at the University of Sydney in 1939. Until the mid 1980s prescriptions were frequently individually prepared and compounded by chemists.

Their three daughters and six of their grandchildren were delivered in Bingara. Bill was more than a chemist, he was an integral member for the Bingara community and an absolute gentleman.

Bingara Pharmacy was the original baby health centre but it wasn’t only babies that were weighed there, the scales also weighed many a locally caught Murray Cod. He also fixed watches, clocks, cameras and glasses (usually without charge), advised on animal treatment and supplied veterinary goods.

An interest in work in the main street earned Mr. Bullough, a familiar figure in his white chemist’s coat, the title ‘The footpath foreman’.

“I have always been very proud to be his grandson,” Mr. Doyle said.

Ian Grieve “We had a lot of people who have contributed a lot to the Bingara community, but these two men really shone out. We are very proud and privileged to do this project today.”

At the luncheon, Lions members unveiled plans for further work on the park.