Bingara Minor League under 8s and 10s travelled away to Armidale on the weekend and had two great games of footy.

It was a close first half in the 8s. Armidale were in form but some great runs by Toby White, Sam Mahoney and Isaak Johnson helped Thomas Young and Steven Todd
over the line. Brooke McKinnon, again proving that rugby league is not just a game for boys, made some encouraging runs and good offloads. 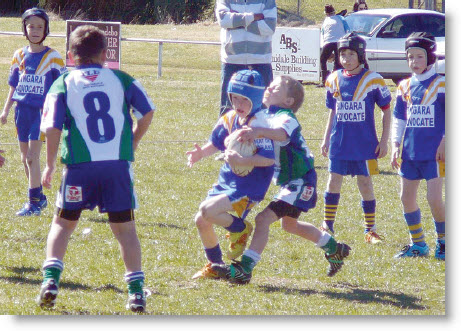 Under 8’s trying their hearts out!

The 8s and the Bingara spectators celebrated Xavier Smith’s first points of his Junior League career as he kicked a fantastic conversion. The points were well deserved as Xavier has been putting in a great effort this year and has improved out of sight.

Tries to Steven Todd (3) and Thomas Young (3) with conversions to Xavier Smith (1) and Toby White (1), the final score did not reflect the great game – Armidale 56 Bingara
28.

The Armidale 10s are a very well drilled side but this did not stop the Bingara 10s putting in another strong team effort. Bingara were rewarded for their team spirit with an awesome run from Jack Todd, pulling defenders along with him, scoring just before the final whistle. Andrew McGarrity converted making the final score Armidale 52 Bingara 6.