The Bingara Returned Serviceman’s Club was on Friday named the 2010 winner of the ClubsNSW Spirit of the Bush Award.  The Club won from a field of more than 300 small regional clubs, and in the process won $5,000 for nominated charity, The Westpac Rescue Helicopter Service.

The winner was selected by 2GB’s Aan Jones, with the aim of rewarding the club that makes the largest social contribution to their local community. 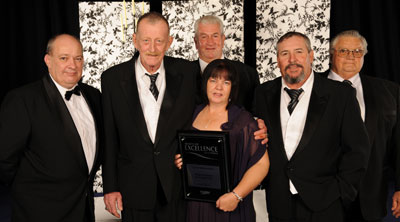 The nomination was submitted by Assistant Manager, Vanessa Patch, with supporting document from David and Lyn Fricke, and including references from John Wearne, Erik and Noelene Ozols and Nancy Capel.  It has been a case of ‘third time lucky’ for the Club, as the Club has been a finalist for three years.

Like many bush clubs, Bingara has longstanding staff and board members who are more family than colleagues. The President, Vice President, Secretary Manager and Assistant Manager ave all clocked up over 14 years consecutive service.

The Club charges just $10 to be a member. In return, it offers pay TV, affordable drinks and meals, Tab and Keno facilities, an auditorium for weddings, school dances and sports night, raffles, bingo, darts, badge draws and pool tables.

CEO of ClubsNSW David Costello said the measure of the Club’s commitment to the Bingara community was never more evident than in 2009 when the economy took a turn for the worst.

“Last year revenue at the club fell by $78,000, largely due to the global financial crisis and the indoor smoking bans. Yet somehow the club managed to increase it donations to the communty by $4,400. Among those to receive a helping hand were victims of the victorian bushfires, the RSL sub branch, local sporting groups and the local Central School.

“The Bingara Returned Serviceman’s Club played a huge role in the local area’s single event in recent times.  In October 2008, Bingara hosted the National Motorhome and Campervan Rally, which for one week saw the lown’s population swell by 200%. The club not only provided transport to the rally for many visitors but also quality meals that ensured the event was trouble free and a raging success,” David Costello said.

Club Assistant manager, Vanessa Patch summed it up best.  “Our population is small but our membership is strong and brave. We have strived to create an atmosphere where we share our life, our work and our community. If only we could change the word ‘members’ to ‘mates’ – because at the end of every day in the bush that’s who your members are.”

Not all members of the RSL Board were able to attend the presentations.

Vanessa told the Advocate the Club is very honoured to hand the cheque to the Westpac Rescue Helicopter Support Group.  “The Bingara RSL Club Board of Directors, Secretary Manager Dan Herringe and all our valuable staff members are greatly excited by the win, and above all thank our members for their continued support and patronage,” Vanessa said.

“As the proud recipients of this award, it strengthens the club’s commitment to providing a quality of service and support, not only to our members, but to our community as a whole.  The support and response from others in attendance was overwhelming, and we wish to thank Club Keno and other participants in this category,” Vanessa said.