The North West Region of the NSW State Emergency Service (SES) has conducted a rescue competition, testing the skills of their volunteers in a range of challenging rescue scenarios, with the Deepwater SES team being awarded first place and the Andy Roberts Memorial Rescue Challenge Shield. 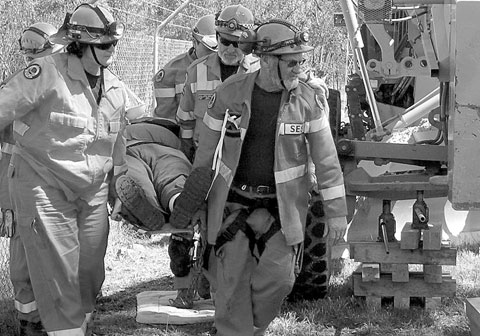 Bingara SES going through their paces, left to right: Jacque Clark, Alf King, Lou Faint, Geoff Leech and Peter Turnbull. The man on the rescue board is Eric Johnson.

The Bingara SES team was announced as runners-up.  Team Leader for the Bingara SES was Peter Turnbull and team members were Alf King, Lisa Laird, Geoff Leech and Lou Faint.  Mungindi SES volunteer Jacque Clark was also a member of this team.

Inverell SES Unit hosted the competition, with the day providing an opportunity for SES volunteers from throughout the region to test and refine their skills in team leadership, casualty handling and rescue from heights.  Every move was monitored and marked by expert SES judges and teams had a strict time limit in which they had to finalise every scenario.

North West Region Learning and Development Officer Jean-Mary Botfield said “These competitions give our SES volunteers and Units the change to get together and not only test their skills but also their operational capability.”

The scenarios included the rescue of two workers from heights, the treating of mass causalities after a building explosion and the release of a man trapped under a grader.

Mrs Botfield praised the efforts of the volunteers, their willingness to learn and the spirit in which the competition was conducted.

The judges were particularly impressed with the team work of the Deepwater SES team which made the difference on the day.