BingaraLatest NewsGeneralBingara SES Volunteer acknowledged for her service to the community

Bingara SES Volunteer acknowledged for her service to the community

Volunteers from the New South Wales State Emergency Service (NSW SES) have been recognised for their diligent service to their community at an awards ceremony held recently in Warialda.

NSW SES Commissioner Mark Smethurst presented awards to a number of volunteers from across the Namoi North West Region with Long Service Awards ranging from 5 years to 35 years of service with the NSW SES. 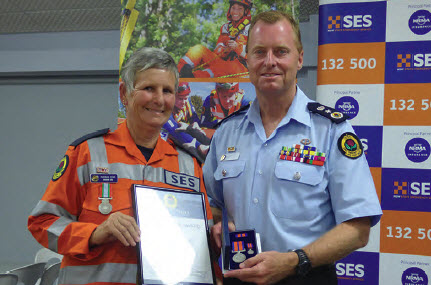 Commissioner Smethurst was delighted to note the local experiences that these members were being recognised for, “their local knowledge and familiarity of their community has been built over those many years and is so invaluable”, he said.

A highlight of the evening was awarding a 10 year Long Service Awards to Rhonda King of the Bingara SES Unit. In handing over the awards, Commissioner Smethurst thanked Rhonda for her outstanding work on behalf of the community.

“These awards are in recognition of the service shown by these members who have dedicated so many years to volunteering for the community”, Commissioner Smethurst, said.

“While all volunteers in the NSW SES show an extraordinary level of commitment to their communities, award presentations such as these provide special recognition to those volunteers whose accumulated wisdom and experience is irreplaceable.

“It is a fantastic achievement that the Region’s volunteers are being awarded with Long Service Awards. There is obviously a huge wealth of knowledge in the NSW SES in the Namoi North West Region.”

NSW SES Region Controller, Andrew Galvin also acknowledged the hard work and dedication of each volunteer who received their awards. “One of the strengths of the NSW SES is the great team spirit and friendships that develop and this strength sees volunteers staying with the service for many years,” he said.

Unit Controller Peter O’Brien said “I was glad to see Rhonda being recognised for her 10 years of service to their community” he said. “It goes to show that you are never too old to be a part of something worthwhile. It doesn’t matter whether you have a few hours or a few days to spare each year, you can get involved with the SES and you don’t necessarily have to be out in the elements battling Mother Nature,” Peter added.

“With the storm season still with us, there has never been a better time to volunteer with the NSW SES. Whatever your background, age, ability and skill-set, there are volunteering opportunities for those interested in joining us,” he concluded.

For more information about volunteering with the NSW SES visit: www.ses.nsw.gov.au or give the Duty Officer a call on 0427 234 212 or just wander on down to the SES shed where you see the big white trucks on Memorial Avenue.