The Gwydir Concert Band is celebrating the selection of six of its members in the West of the Divide Concert Band, which will represent Australia in the Hong Kong International Youth Music Festival that will be held in April 2013. 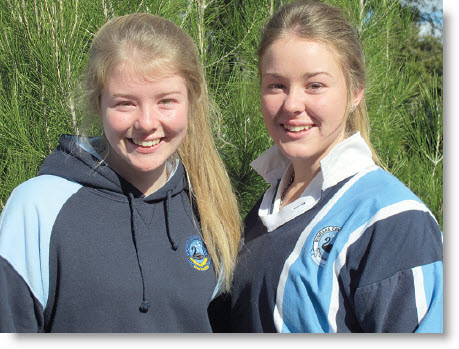 Sisters Tori and Ally Dixon have been chosen to tour with the West of the Divide concert Band, representing Australia at the Hong Kong International Youth Music Festival next year.

The students selected are Beatrice Waller, Tahlia Doyle, Ally Dixon, Nicolette Grabham, Tori Dixon and Tom Waller. The West of the Divide Concert Band is selected from musicians from throughout the Riverina, Western and New England Districts.

Gwydir Concert Band conductor and director, Mrs Robyn Conway will also be touring as part of the staff, along with the Regional Creative Arts Consultants from the three regions. New England’s Di Hall is coordinating the event.

The Festival will host leading international music educators and specialists in all areas. Past Festivals have drawn on the mentorship of teachers and performers from China, Australia, Singapore, New Zealand and the USA.

During the course of the Festival, students and their ensembles will have the opportunity to be inspired and mentored in workshops, master classes and seminars.

This festival has previously run in a variety of countries, including China (Beijing and Guangzhou), Argentina (Buenos Aires) and New Zealand (Christchurch).

In 2013 it will be Hong Kong’s turn. This announcement follows the wonderful success of last year’s West of the Divide Concert Band, which included Gwydir Concert Band’s Ryan Smith, Nicolette Grabham, Hamish Robinson and Ally Dixon. This group received a Silver Award at the Pacific Basin Music Festival in Hawaii.

Mrs Conway is very excited that students from both the schools where she works, Warialda High and Bingara Central Schools, have been selected.

“It is a remarkable achievement for students from such relatively small high schools to reach this level. It just goes to prove that it doesn’t matter where you live; if you have the determination and put in the effort, anything is possible.” She also acknowledged the marvellous support of the families of the students.

“The parents have been exceptional in their support and encouragement of their children and I am sure they are as proud of their achievements as I am.”

Other musicians from our region to be named in the band for 2013 include Kirsten Iszolt from Inverell High School and Michaela Mepham from MacIntyre High School.

This musical will be performed six times in The Roxy Theatre from August 10 to 19. Tickets are available through the tourist information office in Bingara.

Tickets are selling quickly and as was the case with the previous musical, “Joseph and his Technicolour Dreamcoat,” it is anticipated that all shows will be sold out.