Courtesy of Northern Tablelands Local Land Services, attendees were treated to a demonstration by the Koala Detection Dog team from the University of the Sunshine Coast- Dr. Romane Cristescu, Russell Miller and the wonderful “Baxter”.

According to USC, “The best detection dogs are usually the worst pets” – the university have found that dogs that are obsessive about fetching tennis balls can be trained to search for things by using a game of catch as the reward when the item is found. 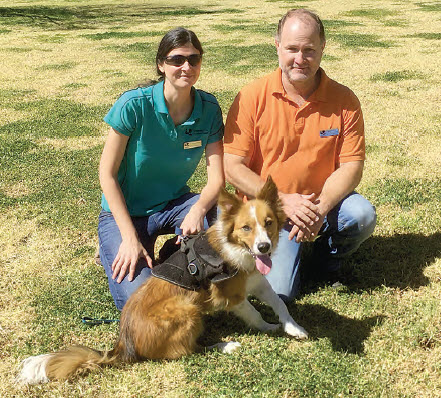 In Baxter’s case, he has been trained to search for Koala scat, and is rewarded by a game of catch when he is successful.

Romane also gave an extremely informative talk on Koalas and the results of the recent Cool Country Koalas project carried out by the Northern Tablelands Local Land Services.

Also included in the talk were ways in which landholders can support Koalas on their own properties – such as providing a watering point in dry times, and planting Koala “friendly” trees, such as White Box, Yellow Box and Mugga Ironbark.

The Detection Dog team have also been utilised by Northern Slopes Landcare Association and Phil Spark ecological to carry out Koala research projects in the area, with some very encouraging finds in the Warialda area, including locating a female Koala, possibly with a Joey.