There is a significant international cycling event coming to Australia and the location is set to be based right here in Bingara. The event is being named the Gwydir Tour and will bring with it, potentially millions of dollars into the local area economy.

It is expected the event will also bring priceless promotion of the Bingara and local region with many national and international media outlets coming to cover the event. It is also predicted that the event will be televised nationally each day, for all eight days of the event.

“We are in a very unique position here in Bingara where we can hold all stage finishes in the one central location.” said event and race director Jamie Ford.

“This is a relatively new concept for a race of this level, but we are receiving some very good interest and feedback, both from here in Australia and overseas. We are in the process of getting the race UCI sanctioned, which effectively means the race instantly becomes International. Teams from all over the world will wish to attend with the hope of gaining valuable world ranking points” 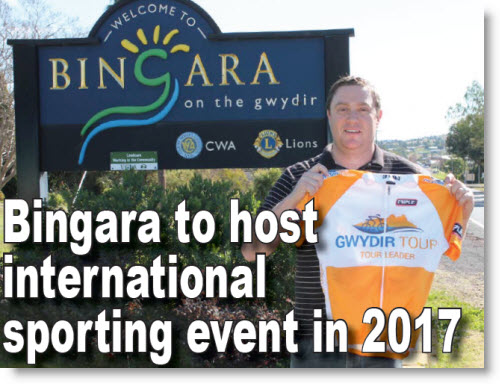 To add to the excitement of the race, the selected colour theme of the tour will be Orange, helping promote the local Orange Festival at the same time.

“We have based the colour scheme of the race as orange to help promote the local Orange Festival, which is a very important part of our history here in Bingara.” said Jamie

“For example, the traditional yellow leader’s jersey will be replaced with an orange equivalent, which will be rather unique.”

The event will be staged over eight days, with the first stage proposed to start on the Sunday afternoon of the 2017 Orange Festival.

Each stage starts at a location outside of Bingara, where the riders travel over 100km each day to reach the finish line here in Bingara.

Start locations for each stage haven’t been finalised, however some of the towns under consideration are North Star, Ashford, Inverell and Narrabri.

“There are 24 teams with 168 cyclists in total. Added to this, a significant police escort with over 60 official team and tour vehicles racing down the road, will make our race look like the Tour de France is visiting the local shire.

It will be quite a spectacle and well worth a look,” said Jamie.

As all the stage finishes are here in Bingara, the town has an opportunity to hold a mini festival lasting the entire week, with plenty of entertainment likely for fans staying over each day to view all the action.

The tour isn’t without its challenges though, with accommodation being at the top of the list.

“We are expecting close to 400 riders and team officials alone, with many more officials, sponsors and media personnel attending.

Hopefully, numbers will swell with thousands of fans, and this will create significant issues when it comes to accommodation.” said Jamie.

“But we are putting together a wonderful team to run this event, both locally and from all over Australia. We are very excited and are looking forward to putting Bingara on the world map.”