Bingara has won the 2015 David Rose Challenge after a good contingent of Bingara Golfers held their own on the Warialda course last Sunday week. This is the second year the challenge has been held with Warialda winning the inaugural event last year.

Bingara golfers handled the Warialda course much better than last year and held onto the good lead posted earlier this year when the first round was held on home turf.

Damien Galvin had the best score on the day with 39 points closely followed by Lloyd Fullerton on 37 points. Bingara golfers took home a few nearest the pins as well. It was great to see such large numbers making the trip to Warialda to repay the support shown by them earlier in the year when we hosted round one. In all there were 23 players for Bingara which was an outstanding roll up. 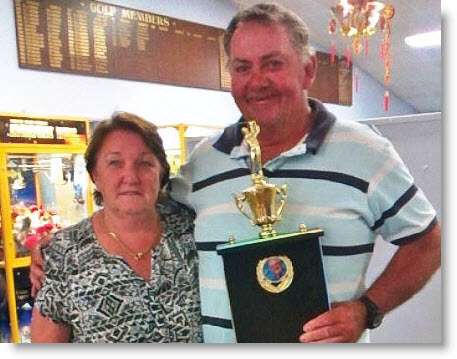 The Rose family was well represented on the day and Lyn Rose presented the trophy to Club captain Vincent McTaggart. A huge thankyou to the Rose family from everyone who played in either day of this very popular event which seems to get stronger each time it is played.

David would be chuffed.