Bingara is delighted to have Nick Gleeson as the 2014 Australia Day Ambassador.  Over the past decade, athlete, accessibility advocate and global adventurer Nick Gleeson has built up an enviable reputation for public speaking. Nick has that rare gift of being able to convey a serious message – that of overcoming the challenges of living with blindness – with warmth, humour and honesty.

He was born in the working-class Melbourne suburb of Broadmeadows in the 1960s, back when a cricket bat was a piece of wood borrowed from a fence. 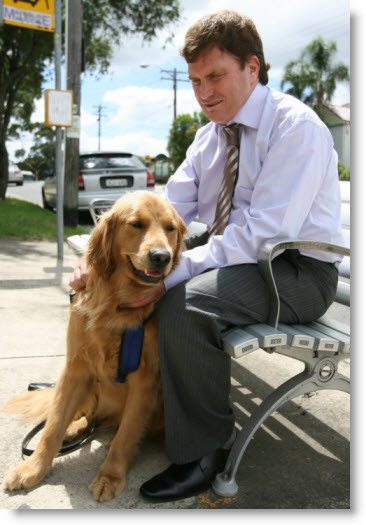 Nick’s life changed forever at age seven when an electronic swinging supermarket door hit him on the side of his head, causing a retinal detachment.

The youngest of seven, Nick experienced a lot of love and loss in his early years. His brother Maurice also became blind at the age of 13 while another, Russell, died at age 23. He attended a boarding school for children who were blind and was one of the first of his peers to finish Year 12. Nick went on to complete a Bachelor of Arts at Melbourne University – no mean feat considering the difficulty a person who is blind faced in accessing information back then.

Despite his academic achievements, Nick’s great passion has always been sport and adventure. He has represented Australia in athletics on three occasions, racing in America, England and Hong Kong. He also played blind cricket (much like the traditional game, but using an audible ball) for almost 20 seasons, representing Victoria, New South Wales and Australia.

Much of Nick’s success as a speaker is down to his ability to bring his sporting and travel adventures to life. These include three times  crossing the finish line in the New York City Marathon, carrying the Sydney Olympic Torch, racing up the 1,576 steps of the Empire State Building and completing the gruelling 90km from Durban to Pietermaritzburg in the Comrades Marathon.

A year after returning from South Africa, Nick put together an expedition named Blind Ambition to climb Africa’s highest mountain. Four members of the expedition reached the summit of Mount Kilimanjaro. The next year, while climbing in New Zealand, Nick had the privilege of telling his hero – Sir Edmund Hillary – of this achievement.

Although these situations are extraordinary to most of us, Nick’s down-to-earth nature and compelling descriptions of what he smelt, heard and felt at the time enable the listener to place themselves in his well-travelled shoes.

In 2010, Nick climbed to Base Camp Everest a dream he has pursued all his life and despite the personal challenge, he loved the experience.

He connects with people of all backgrounds – in fact visiting rural communities as part of his Australia Day Ambassador duties is a highlight of his year. Importantly, he possesses a talent for making the audience feel comfortable and confident about asking him questions about blindness.

Nick describes himself as a very ordinary person who has managed to follow many of his dreams – among them marrying Heather, who is also blind, and raising two teenagers, Peter and Belinda

Nick, believes it is the small steps that often lead to achieving goals in life.