Matt, who is 26 years old, was born 15 weeks premature, has Cerebral Palsy, and is vision impaired. He has had between 40 and 50 operations ranging from brain, heart, lungs and ears.

He has not let those disabilities stop him, however. He has represented Australia at the past three games: Athens 2004, Beijing 2008 and London 2012.

He reached the finals at Athens, and won Gold in the Medley Relay in Beijing. 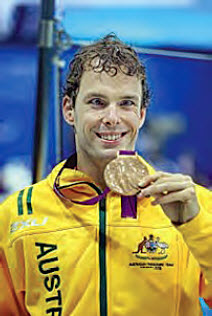 In 2009, Matt competed in the World Championships in Brazil, picking up three gold, and setting three world records.  The next year, he was back at the world Championships, this time in the Netherlands, where he won two Gold, 1 Silver and 2 Bronze medals.

In the London Paralympics in 2012, Matt won one Gold one silver and three bronze medals.

He was awarded an Order of Australia Medal in the 2014 Australia Day Honours “for service to sport as a Gold Medalist at the London 2012 Paralympic Games.”

In 2015, he was named Athlete of the Year with a Disability at the New South Wales Sport Awards.

In Bingara, Australia Day will be celebrated at the Museum, with breakfast before the official ceremony. Local citizenship awards will be announced at that ceremony.