A man with a long and varied association in the arts in Sydney and overseas will be Bingara’s Australia Day Ambassador. 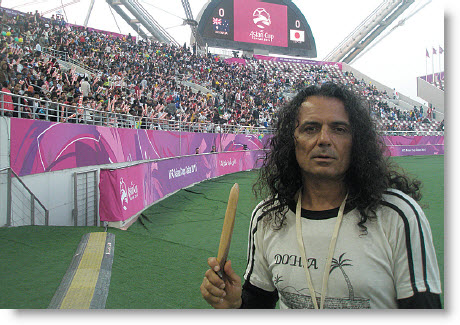 Jose Calarco has covered almost the entire spectrum of experience, from producer and administrator of large-scale events, to innovative artistic direction in the fields of dance, film, theatre and music.

José was able to multi-task in marketing, box office, administration, sales, computers, performing musician, recording, writing and artistic direction, the success came with little financial support but through years of research and hard work, now Descendance has begun to realise its dreams and potential, performing at the World’s premier events.

Jose was at the forefront of the world music and dance movement in Australia as a producer, promoter and performer.  He is the director of four successful performing dance companies from Australia. His five years as a Film Buyer & Programmer for Village/Roadshow helped broaden his general knowledge and skills in the arts.

Jose has been producing indigenous performances at International corporate events for over ten years, with distinguished audiences from the fields of science, technology, medicine, performing arts, and politics, and hosted and entertained many visiting international dance companies in Australia.

Jose has created a blue chip client base for indigenous dance and gained immeasurable TV and Media around the world for the indigenous arts.