Bells could be heard ringing from different locations throughout Bingara on Monday morning. Bingara District Historical Society, the school, churches and the Tourist Information Centre united for the event, which commemorated both the centenary of the commencement of the First World War and the 70th anniversary of the Breakout from the Cowra internment camp. 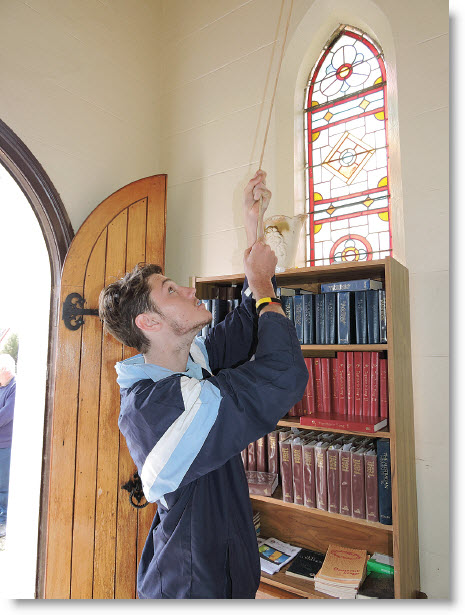 Lachlan Butler was chosen to ring the bell at the Uniting Church commemorating the centenary of the start of World War I.

Bingara District Historical Society secretary, Kath Bleechmore was pleased with the number of organisations taking part at a local level.

“It was wonderful to hear the bells ringing at different intervals from 11am and I hope it really did encourage and remind people to reflect and acknowledge the sacrifice made by so many,” Kath said.

“When the war began, there was actually great excitement. People did not know what was in store, but there was pride and encouragement for everyone to be involved.

Women were waving off the men and anyone who hadn’t signed up was asked why they hadn’t. Everyone wanted to do their part but they didn’t know what the cost would be.”
The ringing of the “Peace Bells” was an Australia-wide initiative.