Bingara Returned Serviceman’s Club’s recent win of the ClubsNSW “Spirit of the Bush” Award and subsequent win of $5,000 had led to a very generous donation to the Westpac Rescue Helicopter Service New England North West. 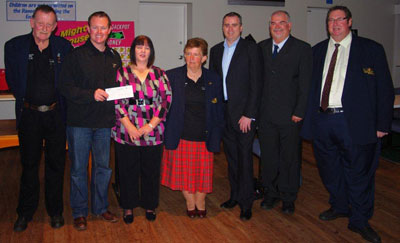 The club decided upon winning the award, which recognises a Club’s commitment to the wider community, to donate the prize money to benefit the life-saving Service.

When the Club was presented the award in May, CEO of ClubsNSW David Costello said the measure of the Club’s commitment to the Bingara community was never more evident than in 2009 when the economy took a turn for the worse.

“Last year revenue at the club fell by $78,000, largely due to the global financial crisis and the indoor smoking bans. Yet somehow the club managed to increase its donations to the community by $4,400.

“Among those to receive a helping hand were victims of the Victorian bushfires, the RSL sub branch, local sporting groups and the local Central School,” he said.

A celebratory dinner was held at the Club on Friday, July 30 and Bingara RSL Club president, John Bancroft, was pleased to present the Service’s Senior Air crewman, Trent Owen, with the $5,000 cheque.

“We truly appreciate this generous donation to our Service,” Trent said.

“Thank you so much. It is only through the ongoing support of communities like Bingara that we can continue to provide free of charge patient transport in times of emergency,” Trent said.