Bingara girl, Crystal Cooper recently wowed the 1200 Lions and guests at the TRECC centre in Tamworth when she took part in the National Leo of the Year contest.

Crystal has already won the NSW Leo of the Year and the contest was stepped up a notch or two when International President of Lions, Barry Palmer flew in from USA to attend the Lions Convention at the TRECC Centre. 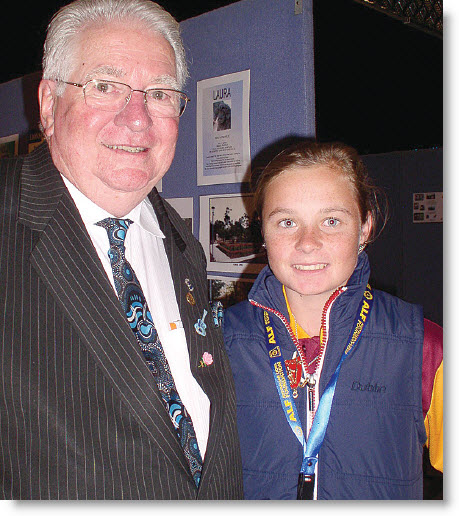 Barry Palmer, pictured with Crystal above, is the first Australian to become International President in the history of Lions Club.

Mr Palmer was very impressed with Crystal as she is the youngest ever participant in this contest and also the first from Bingara. Crystal went through vigorous interviews and scrutiny before she gave her speech on abused children which impressed Mr Palmer so much her referred to Crystal twice in his address to the Lions Club members who attended the 2014 Australian National Convention.

“This would scare most adults but Crystal sailed through the process with calm and grace belying her young age,” Bingara Lions spokesperson, Judy Adams, told the Advocate.

Crystal didn’t win the title but with the standard of competitors and the dedication each one bought into the contest ensured everyone came away a winner. Competitors came from Queensland, South Australia, Western Australia, Tasmania and Victoria.

Joel Pattison-Cashman, 20 years of age, from Queensland won both the Leo of The year and the Public Speaker award.

Crystal had a very strong support crew of 14 Bingara Lions Club Members who went by bus to Tamworth, in their new red shirts designed especially for Convention.

“It was a cold and miserable day, but not one of us would have missed seeing one of our own Bingara Leos achieve such a great honour,” Judy said.

Sonja Stevenson, a newly inducted Lion, presented Mr Palmer with a Goodie bag from Bingara Tourist Centre and in return he presented Sonja with a very special and coveted badge.

Bingara Lions took a huge box of bags to distribute among the many visitors to Tamworth in the hope to lure some of them to Bingara. These were well received and the Lions members from around the country were impressed with the impact Bingara Lions had on the Convention.

Leo Clubs are a great way to meet inspiring young people who dedicate their talents to help their own communities and others as well.

With numerous programs to choose from such as Youth of the Year, Student Exchange Programs and Scholarships, Leos have a great many opportunities to grow and learn along the way.

If you are interested in joining Leos contact any Bingara Lion for information. Bingara Lions meet every 1st and 3rd Tuesday of the month.