The 2018 Bingara Veterans Week of Golf played last week was an outstanding success with 82 individual competitors taking to the course throughout the week. 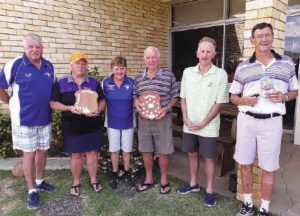 There was some very competitive golf over the week which started very early on when first time competitor Ray Clegg (Muree Club/Harvey Bay) scored a very exciting hole in one on the 7th on day one.

The Thursday event which was generously sponsored by The House of Golf – Regional NSW was also won by Ken Bullock with Robyn Poole (Wingham) taking out the ladies event.

The veteran golfers were all very pleased with the event and the town of Bingara and have given a strong indication they will be back and be bringing their friends along next year. The accommodation venues are already being booked a year in advance, with this year’s entry numbers more than double those of last year.

The event is gaining a strong reputation and next year looks very promising with many golfers rating the event a “ten out of ten”.