Kristen Heal was named Young Citizen of the Year. Kristen is an excellent role model for the youth of Bingara. She is this year’s School Captain of Bingara Central School, she is a part-time employee at Fay’s and has been a keen member of the Bingara Pony Club, both as a rider and as a worker on club days. 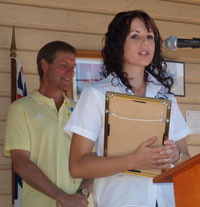 Kristen also plays Oz tag and between all this, is an excellent student. Last year, Kristen was one of the main drivers of the school bush fire appeal which raised over $2000 for the bushfire victims in Victoria.

Kristen was also successful in the 2009 ABC Radio’s Heywire competition, which is open to people aged between 16 and 24, being awarded winner of the New England region.

Kristen wrote an essay about country and city life and the many differences between the two, having been encouraged by her English teacher Ms Di Gallagher to enter the writing competition.

After receiving her Young Citizen of the Year Award at the Australia Day ceremony in Bingara, Kristen travelled to Canberra to join the 29 other finalists in the Heywire competition, who came from all over Australia.

While in Canberra, the young people discussed a range of issues, Kristen choosing Climate Change and the Environment as her special subject of interest.

The finalists attended Federal Parliament’s Question Time which Kristen greatly enjoyed, particularly when the Opposition members stood and waved to them, having been informed that they were in the chamber.

Kristen said she was a little disappointed not to meet any of the leading politicians like Julia Gillard or Kevin Rudd however, she said the ones she did meet changed her perspective on politicians, finding them “down to earth and interested to listen to what we had to say.”

Kristen was also lucky enough to be amongst a small group who were given a special escorted tour of the restricted areas of Parliament House by MrsTeresa Ramsey, wife of Member for Grey (SouthAustralia), Rowan Ramsey.

This year will be focused on studying for the HSC, however Kristen will continue working at Fay’s having cut back her hours to eleven hours per week.

She will also help out at Pony Club events but she will not be riding this year. As for the future, Kristen wants to attend university to study something associated with English and writing, like journalism, or teaching.

Kristen’s next engagement is the “Our Place” Country Town Living Forum in February, which she has been invited to address.