There would be few nastier plants in farming or grazing operations than Tiger Pear. 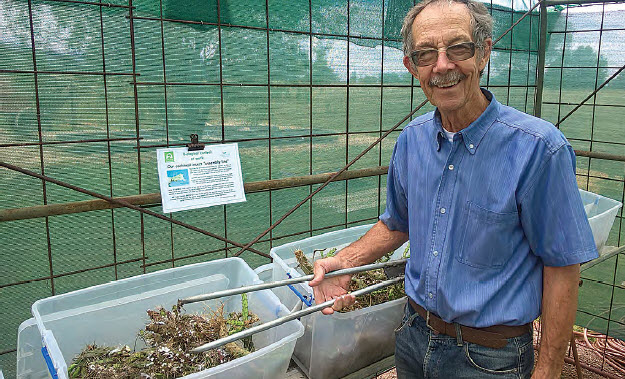 Retired Weeds Officer for Gwydir, Les Tanner shows how important it is to Handle With Care!

Its rope-like stems are covered with needle sharp spikes that can spear through socks and boots and bury into flesh. Even worse for grazing animals, is when it pierces their eyes and mouths and festers causing them abject misery.

Tiger pear was most likely brought into Australia as an ornamental plant for gardens.

On a larger scale, its ‘cousins’, the Prickly Pear and Tree Pear, were introduced with the First Fleet in 1788; their purpose was to grow the cochineal beetle who produced the dye carmine for the red jackets of soldiers.

The beetles did not survive this first attempt of introduction but the pears spread far and wide, infesting great tracts of northern NSW and Queensland well into the 20th century. More recent attempts at chemical control has had mixed results.

On a large scale it works well, but as the pear has retreated into small pockets the chemical control has become too expensive.

Enter round two of biological control, another cochineal beetle that eats into the pear and reduces its spread. 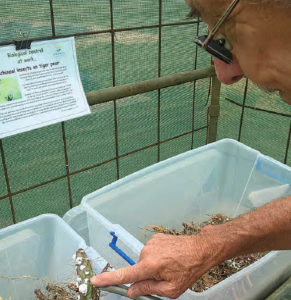 The Northern Slopes Landcare Association (NSLA) through funding from North West Local Land Services, has supported former Gwydir Weeds Officer Les Tanner to oversee a project to spread the cochineal beetle. Based in the ‘green shed’ at The Living Classroom, Les has collected bins of pear varieties and is breeding the cochineal beetle there.

NSLA is now encouraging landowners who have patches of the un-infested weeds to bring some to TLC and exchange them, at no cost to the landholder, for some infected plants.

“The idea is to have this biological control work its way across our landscape,” said NSLA Coordinator Shelley McDouall.

“We might never fully eradicate this prickly pest but this method will ensure that the control agent is given the best chance to spread and infect,” she explained.

While Les Tanner will see that the supplies of infected pear are always on hand at TLC, “My serious recommendation is that you always handle with care,” he said.