Organisers for the Unleash the Black Dog Ball recently called for funding applications to assist community groups in raising awareness for mental health in the Gwydir Shire.

Twenty-three thousand dollars was raised at the 2016 fundraiser, and these funds have now been allocated back into the local community, with the focus on raising much needed awareness on mental health and suicide prevention in males. 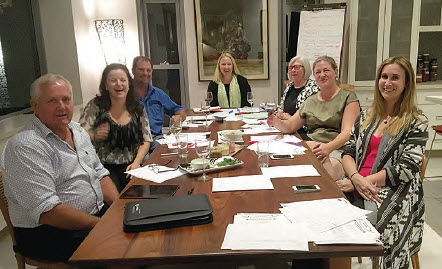 The following programs have been awarded grant funding:
– Healthwise New England North West. A contribution was made for the recently held Men’s Health Night in Warialda, which saw 260 people in attendance;
– Chef and Molly Jones: a series of men’s cooking classes to be held. Chef and Molly Jones are partnering with the Rural Outreach Service and Uniting Church, and will focus the evenings on healthy diets for better mental stability.  Chef will demonstrate cooking and provide recipes for healthy meals, and discussions will be held on where to access assistance for mental health related concerns. For further information on dates and times contact 0408 166 948;
– Healthwise New England North West, in conjunction with Gwydir Shire Council and Bingara Multi-Purpose Service: a contribution was made for a Men’s Health Night to be held in Bingara in the near future;
– Sally Neville, Garry Voysey and Rhonda McGregor, auspiced by Bingara CWA: A donation was made for a series of dinners, to be rotated throughout the towns and villages of the Gwydir Shire. These dinners will see speakers relating to men’s health and will be a great opportunity to network with like-minded people;
– Landcare in conjunction with Gwydir Shire Council: A series of mental health workshops will be held, in partnership with Farm-Link;
– The Black Dog Institute is the world leader in the research of mental health prevention. A donation was made to assist this important organisation;
– A donation was made to Bingara Lions Club as a thank you for committee members volunteering at the ball;
– A donation was made to CWA Bingara Branch as a thank you for committee members volunteering at the ball.

The funding committee have been pleased to see so many organisations granted financial assistance, which in turn will see our local community members supported on what is an important cause.

Recently the Warialda Men’s Health night was held, where Wendell Sailor and Justin Karcher were the special guest speakers. Committee member Christine Connor said “we were looking for extra funds to help cover the cost of the night, and being successful in the grant through Unleash the Black Dog meant we had no shortfall”. It’s great to see a local fundraiser supporting local initiatives”, she said.

The 2017 fundraiser date has been set, and sponsorship forms are now available. This year the girls will fundraise for the mental health and well-being of women in the Shire. “Women are the back-bone of so much – in both the community and at home, so it’s exciting to change the dynamics this year, while still focusing on the cause”, said organiser Sarah Crump.”

Sponsorship forms are available by contacting the girls at unleashtheblackdog@gmail.com or on 0428 511 219.