Drivers coming into Warialda will notice a bright, blue tree as they come into town from Bingara and Moree.  The tree was painted two weeks ago by a team of volunteers led by Warialda builder Rhys Aleckson, who took part in the nationally-recognised Blue Tree Project to raise awareness and start a conversation in Warialda around mental health. 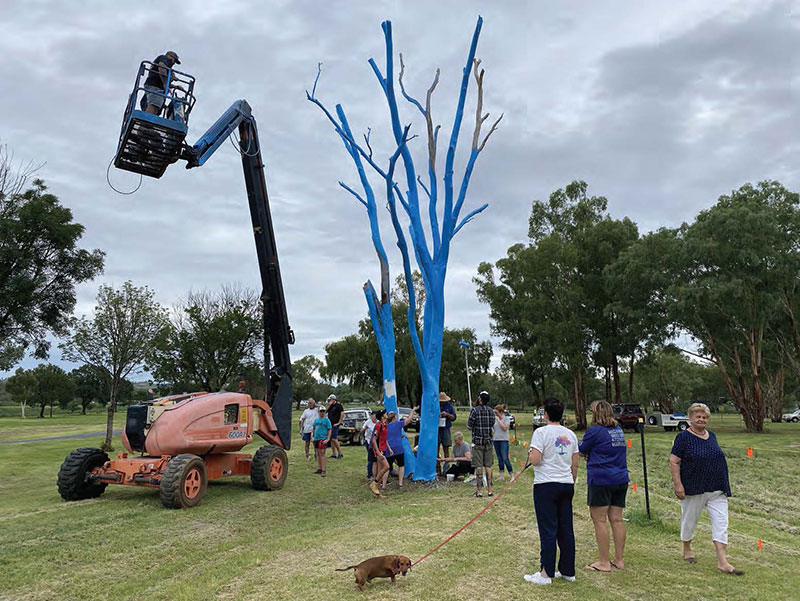 Photo: Laura Carroll.  Warialda residents rallied on the bends coming into town from Moree to paint a tree blue to raise awareness and start a conversation around mental health and suicide. The tree forms a part of the Blue Tree Project.

Rhys was originally informed of the Project by Rod & Jan Williams, who gave Rhys a tree of his own to paint after the loss of his brother Blocka last year.

The Blue Tree Project was started in Western Australia by Kendall Whyte, who decided to turn a practical joke her brother Jayden once played, painting a willow tree blue,  into a memorial to raise awareness for suicide after he took his own life.

The painting was organised through Rhys’ “little Facebook Messenger” group, who’ve organised and held other fundraisers for the town before.  “If there’s an opportunity to do something, mental health-wise, we do,” Rhys said.  “I just put a message in one day saying what do you think about [painting a Blue Tree] in town somewhere that’s prominent, and try to involve the town?”

One of the members of the group saw the tree on the S-Bends outside town and said it was the perfect spot on the highway coming in.  “A couple of the girls in the group did the paper trail went through the Council and got permission off the council.

“The Council were good for it; they were cooperative and helpful – they got their arborist to trim the tree up for us and give us permission to do it.” 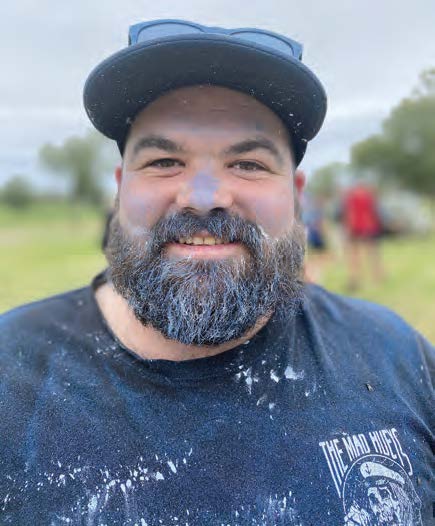 From there, Rhys started talking around Warialda, telling people his plans.  “The manager from IGA, Amber, she just started the ball rolling with sponsorship, and before I knew it she pretty much had everything: Dulux with the paint, Carlo’s with the sausages and cool refreshments, and her sisters donated soft drinks and cold water for the barbecue.  With cold refreshments and hot sausages available, work went quickly.

“Derek Rose of Rose & Sons Earthmoving donated the cherry picker.  It was a lot of small cogs in a big machine,” Rhys said, “A lot of people.  The whole thing’s a lot bigger than one person, one group. It’s a whole community that’s come together.

Rhys’ friend Laura Carroll was instrumental in helping the event off the ground.

“When Rhys brought up the idea of getting a group together and painting a tree blue, myself and others approached jumped at the opportunity.  “I grew up with the Aleckson family, we lived in the same street and we spent a lot of hours after school, on weekends, and throughout the school holidays together, so when I found out about the passing of Rhys’ brother, Blocka, it hit fairly hard,” Laura said.

“Aside from this, for a few years now I have been keen on raising awareness of mental health issues, something that many people unfortunately deal with in silence and on their own.  After having my own battles with anxiety, I realised that these issues are fairly common and really should not be taboo topics.”

“The turn out on the weekend was great. There were plenty of other locals who popped in to throw a splash of paint on the tree, or even just for a chat.”

Rhys estimates there was a peak of 60, with plenty of other helpers dropping in throughout the day.

Even before the tree was dry, Rhys says that it was already having an effect.  “They said a lot of people opened up down there – started talking about things that they normally wouldn’t which is a positive thing.”