Fine weather prevailed, and around 100 players participated coming from throughout the District, from Tingha to Moree and south to Narrabri with even a visitor from the Gold Coast participating. 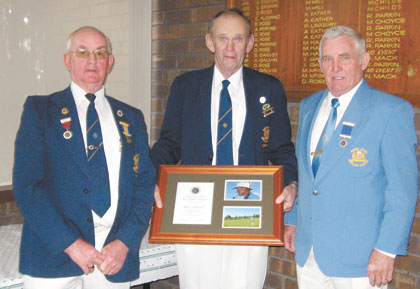 The Award was presented by District President John Mallise, and Zone 3 State Councillor for Royal NSW Bowls, Maurice Gleeson, presented Ken Smith with an Appreciation Award for his work as former President, now Head Greenkeeper at the Bowling Greens.

The highlight of the Day was the presentation of an Appreciation Award to Ken Smith from the Bingara Bowling Club for his outstanding contribution to Bowls and particularly to the Bingara Club for his work as the immediate past President and the current Head Greenkeeper.

Ken’s tireless effort on the greens have put Bingara on the map throughout the New England North- West as having arguably the best Greens particularly the bottom one.

John also presented the Bingara players with their Pennant Badges and Flag for having won the District 7 Pennants.  Those players will represent the Club at the Zone Round Robin to be held at Inverell East on June 19 and 20.

A team from Warialda won the competition for the day, with a team from Moree being the runners-up.

The Club appreciates the hard work done by the volunteers who make these Days possible, and special mention should go to Jenny Hawkins and Mandy McGarritty, who helped run the ever important bars, among other things.

The players also enjoyed a great morning tea provided by the Lady bowlers and a nice lunch provided by our caterers, Steve and Joanne and helpers. Special mention also to our more than capable photographer Marilyn Crook. Janele French won the 100 Club.