Rosario La Spina, Brisbane’s colourful ex bricklayer who accidentally found a voice that launched him to international celebrity status will appear at the 2010 Opera in the Paddock concert at Mimosa, Inverell on Saturday, March 20, 2010.

An excited Peta Blyth, who organises the annual concert with her grazier husband Bill, says she has been trying to secure a spot in the renowned tenor’s busy schedule for some time. “He is a very warm and engaging person and has wanted to come to the Paddock  for a couple of years but he is always in huge demand,” she said. “However, we’ve managed to book him at last and it will be well worth the wait.” 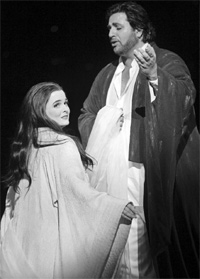 (Left: Nicole Youl as Cio-Cio-San and rosario La Spina as Pinkerton in Opera Australia’s Madama Butterfly. Photograph Jeff Busby.)
Rosario decided to explore his singing talent when an accident put a temporary end to his career in the family construction business and sprang to fame when he won the hotly contested tenor competition at La Scala in Milan in 2000.

After studying at the world’s most famous opera academy, he has forged an international career, performing  at la Scala and  leading European opera and Asian opera houses as well as with Opera Australia.

He has sung at la Scala,  Opera di Parma, Genoa, Welsh National Opera, Modena, Osaka, Japan. Taiwan, Spain, and made his debut  with Opera Australia as Cavardossi  in Tosca in 2005. Since then he has taken on leading roles with the national company including Pinkerton in Madama Butterfly,  the title role in Tales of Hoffmann and  Rodolfo in La Boheme . He recently released a CD Rosario with Monte Carlo Orchestra.

At Opera in the Paddock he will be joined by renowned baritone David Wakeham who has also spent many years  based in Europe, performing in leading roles at La Scala, Zurich, Komische Opera Berlin, Leipzig, Munich, Stuttgart as well as with Opera Australia.

Two young artists from Opera Queensland, mezzo soprano Zoe Taylor and soprano Milica Ilic will also appear on the Paddock stage for the first time, along with soprano Peta Blyth, baritone Shaun Brown and Adelaide based conductor Tim Sexton who made his debut at Mimosa last year.

The opera night will be preceded by a German and Italian Song evening at the Inverell Town Hall on Friday, March 19. “We have a great program planned and are delighted to have such an exciting group of singers for our ninth Paddock concert,” said organiser Peta Blyth. “We will be  performing sections of Mozart’s  The Marriage of Figaro , Verdi’s La Traviata, Verdi’s Macbeth and Tosca. Rosario will sing some numbers from his Neopolitan Songs CD which has just been released.