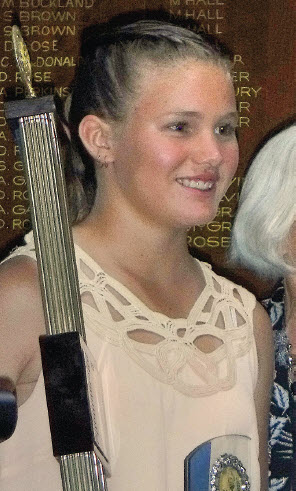 Primary school girl Brooke McKinnon was awarded the 2016 Sportsperson of the Year Award on Saturday ahead of very strong field of athletes. Brooke, who attends Bingara Central School, was judged to be the most outstanding sportsperson by an independent judging panel who were especially impressed with Brooke’s versatility and manner in which she conducts herself when competing.

The judging was undertaken for the awards by the Warialda Sports Council and President Clarissa Barwick made special comment on “Brooke’s strong performance across a number of sporting endeavours and the level at which she been able to represent in each of her chosen sports made her, without a doubt, the top choice. Brooke is obviously well renowned and respected among her peers as she was nominated by multiple organisations for a variety of sports. She is a very talented young girl with a bright sporting future.”

Over the last year Brooke has successfully competed and represented in a number of sports which include Athletics, Cross Country, Soccer, League Tag, Swimming and Horse Sports (Camp draft in particular).

Brooke was well supported at the awards with a large group of family and friends present to see her take out the major awards after earlier in the evening picking up the Sub-Junior Girl Award.  The win was very well received by the large sell-out crowd who attended the rejuvenated awards hosted by the Bingara Sporting Club.

Another popular winner in the very strongly contested Service to Sport Award was Marilyn (Mashy) Dixon. Mash was nominated by the Bingara Bullets as “the Bullets number one supporter and volunteer. Mash has always been a passionate supporter of all things “Bingara” and an inspiration to many. She is always giving and never expecting anything in return”. This section was very well supported with nine other very worthy nominees.

Sports team of the year was taken out by the Bingara Oztag State Cup Squad. The judges worked hard to separate this section with seven very worthy teams being nominated. The Bingara Oztag squad competed in the State Cup held in Tamworth earlier this year. They competed against much stronger Metropolitan teams and performed very well.

Senior Sportsperson of the Year went to Alex Abra. Alex was nominated by the Gwydir River Rats who he plays for and co-coaches. Alex received the 2016 Best and Fairest Award (all grades) for the New England Rugby Competition as voted by Referees. He acts as Joint Coach of Gwydir River Rats which is quite an achievement for such a young man. Alex has an outstanding attitude to Sport and a professional approach to competition and training.

Junior Sports Boy and Sports Girl Awards were also won by outstanding all-rounders. Sam Perrin and Erica Dixon were the winners and both displayed a huge diversity in sporting abilities by shining in a number of sporting endeavours. Sam was nominated for swimming, athletics, rugby league and equestrian, whilst Erica showed her diversity being nominated for swimming, athletics, equestrian & dance.

Sub-junior Sports Boy of the year was a very popular win and received a big cheer from the crowd, especially by the Bingara Pony Club who were very strongly represented at the Awards. Young horseman Luca McLachlan won this section after having an outstanding year both in and out of the saddle. Luca is member of the NSW Sub-Junior Polocross team and he also competed at the NSW State PSSA Athletics Championships as a member of the Northwest 4 x 100 metre relay team. Luca was also a part of the successful Bingara Pony Club Junior Team who were this year’s winners at the Zone 8 Championships.

Bingara Sporting Club President Tim Cox conveyed “the clubs sincere appreciation to everyone who attended or supported this fantastic event. In particular we thank those people who went to the effort to nominate these amazing athletes and volunteer supporters. Thank you to Gwydir Shire for their sponsorship and a big thank-you to all the organising committee members for your hard work. We look forward to hosting these awards for many years to come.”