Calendar Girls live on stage at the Roxy tomorrow!

“Calendar Girls” is based on the true story of a group of Yorkshire women who produced a nude calendar in 1999 to raise money for leukaemia research.  The 2003 film of the same name starred Helen Mirren and Julie Walters in the leading roles.

It follows what happens when the husband of one of the members is diagnosed with cancer, and her determination to do something meaningful in his memory when he dies.  As the plot progresses, the action touches on the individual stories of the widow’s friends. 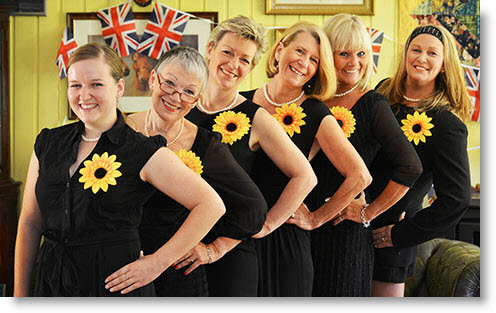 The audience catches glimpses of the losses in each of their lives: the uptight group leader, the golf widow, the young woman with the womanising husband, the unsuccessful businesswoman and the retired school teacher.

All this is revealed as a daring plan is hatched to produce a nude calendar in the hope of raising enough money to buy a comfortable couch for the oncology ward’s waiting room.

The show features a cast of 12 and has already played to packed audiences in Redcliffe, Gympie and Noosa; has become the fastest selling play in British theatre history, received the ‘What’s On Stage Award’ for Best New Comedy in 2010 and is now a worldwide comedy hit!

‘This is a play that plenty of people in our shire can relate to, we have countless community groups and individuals who work tirelessly to raise thousands of dollars for charity each year,’ said Georgia Standerwick, Gwydir Shire Council’s Economic Development Officer. ‘Full of warm and touching moments, there are plenty of laugh-out-loud lines too,’ said Georgia.

Calendar Girls is being performed at the Roxy Theatre on Thursday April 3 at 7.30pm.

SEATING / TICKET OPTIONS:- Show only Tiered Theatre Seats or Show + 2 Course Dinner @ Roxy Cafe (All tickets / bookings must be online or at the Bingara Visitors Centre – please do not book at the Roxy Cafe).