A remarkable woman shared her incredible story with a capacity crowd at The Roxy on Thursday evening. Turia Pitt engaged the audience with a balance of candid detail, inspiration and amazingly, humour. 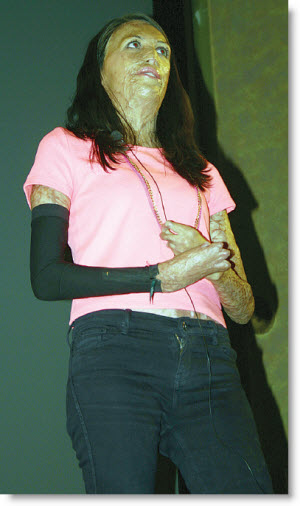 Turia suffered severe burns to most of her body when she was caught in a fire during an ultra marathon in The Kimberley region in 2011. Far from withdrawing from life, Turia has turned this horrifying and gruelling experience into something to learn and grow from, and she hopes it can do the same for others.

“I have everything to live for,” Turia said. “It has been the fight of my life but we are all so much more than our bodies. The power of the mind is an amazing thing and it is incredible what you can do when you put your mind to it.”

Life changed forever for the young lady that day. Turia, a former model and engineer has undergone many surgeries and procedures with many more to follow.

There have been setbacks and difficulties hard for others to imagine. She is the first to admit it has been far from easy.

“I do have bad days, and I do get frustrated, especially when I have not been able to do something myself and have had to rely on other people. I have been angry. I had to overcome so much, from a loss of independence to the transformation of my appearance.

There have been some very dark times. And it is alright to feel like that. It is part of being human. It is not realistic to feel good all of the time. But I have a mantra I now live by and when you say it and say it again you really do start to feel it and believe it. That is, ‘I may feel bad today but I won’t always feel this way.’

Turia came to Bingara as part of the Upper Gwydir Landcare Association’s Women of Mettle Forging Leaders events in 2014. She was accompanied by her devoted partner Michael, who gave up work to care for Turia after the accident. “He has been my rock,” Turia said.

“He loves me exactly as I am and I have so much respect for him for his dedication and support. He has been there when I have been frustrated and embarrassed, and felt worthless and useless day after day, month after month. In those critical moments after the accident, I remember feeling elated just at the thought of being alive. Then you desperately want and need to be with the ones closest to you.”

Turia credits the unconditional love and support of Michael and her family and friends as getting her through, as well as some in-built tenacity.

“We were always brought up to believe we could achieve extraordinary things, but the biggest and most crucial message I received from dad was “no whinging, no bloody whinging!”

She also said the practice of positive thinking and setting goals, no matter how small continues to be vital.

“The very first step to reaching a goal is visualising it. If you really want to do something you can find a way to do it. We are all so much stronger than we give ourselves credit for. Decide what you want, who you want to be, love the people around you and never, never give up.”

She encouraged people to focus on the future.

“I don’t really see the value in looking at the past. Make the most of each day, because we only get one shot at life.”

Turia has penned a book ‘Everything to live for,’ on her experiences, which she feels “has helped her heal from the inside out,” and took time to sign copies and answer questions from the audience.

In conjunction with her motivational talks, Turia has continued on with her voluntary work and fundraising efforts for Interplast. Told she would never run again, Turia turned that into pure motivation and has already recommenced marathons. Soon she will be taking on the Great Wall of China. Turia also has plans to become a doctor.

Among other accolades, Turia was recently and deservedly named as the NSW Premier’s Woman of the Year.