BingaraLatest NewsVision 2020Carbon Farming, the way of the future.

Carbon Farming, the way of the future.

“Carbon farming is the only way to go!” says Allan Yeomans.
Bingara hosted a visit by Allan Yeomans last week. Allan, son of P.A Yeomans of “keyline” fame visited, with his wife Christine, to inspect The Living Classroom project in the town.

P.A Yeomans’ initial work on water catchment through “keyline” contouring, took place in the 1940’s. During that period he conceived of “keyline” while working as a mining engineer. For a short time he lived, with his family, in Bingara where he prospected for gold.

Son Allan joined his father’s work in the fifties, and in addition to attaining a degree in science, he developed the Yeomans’ plough, for minimum tillage and the retention of soil nutrients. Allan’s inventive mind was wide ranging. The famous Aussie invention, the banana chair, was his too.

Allan’s focus now, is on addressing issues regarding carbon sequestration into soils. He is a strong advocate for soil humus development through shallow ripping and the encouragement of organic material throughout the soil profile.

Allan has proposed a system of carbon measurement and has lobbied political parties to seek the establishment of a “sensible” rewards scheme for those farmers who successfully increase their soil carbon content. 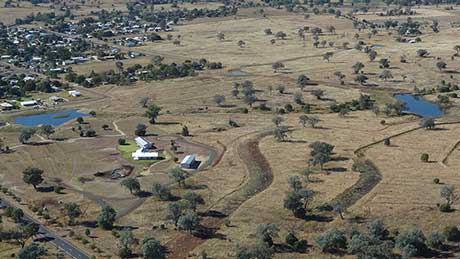 The Living Classroom May 2013.  Click the image to enlarge.

“Taking the excesses of carbon from our atmosphere and putting it into the soil is the only way to successfully deal with Global Warming,” Allan believes.

Members of The Living Classroom Steering Committee were delighted to have Allan and Christine in town and gained many ideas from Allan that could be applied to that project. Vision 2020 President and TLC Steering Committee Chairman, Garry McDouall and his wife Linda, hosted the Yeomans at “The River House.”

Christine Yeomans, by no means lives in her husband’s shadow. She has been the Queensland citizen of the year and was runner up for the national title. Those accolades stemmed from Christine’s leadership in the drought relief programs during the early 1990’s.

The Yeoman’s now reside on the Gold Coast. Bingara was just a short helicopter flight away for them. Allan pilots his own “chopper” and has had a long love affair with flying and gliding.