Celebrating Women in League this weekend

Celebrating Women in League this weekend, the Bingara 12’s turned up to a freezing cold Guyra Sporting Complex with more than a hint of pink and were finally rewarded for all their hard work and committment with a fantastic game.

For those of you who have been following them this season, you will be aware of the difficulty in keeping up with the minimum numbers for this age group. They have struggled, at times, but have turned the corner and are committed to seeing out the rest of the season – no matter what.

With thanks to coaches Rodney Larkins and Dave Sullivan, the 12’s are starting to put some good play together and they did not dissapoint this week at Guyra where they put on a great show of footy. Great defence by Tam Lagaluga and Sam Briody kept the scoreline close.  Dylan Butler was rewarded for all his hard work with 2 well deserved tries. Tom Southwell, making his debut, along with younger Brother Clayton played well as did Brothers Tim and Ben Johns-Bunyan.  Daniel Reading and Liam Mack ran the ball well and Chloe Butler, on the wing, was great support in defence. Final Score 16 – 8 to Guyra.

In other games, the 8’s were off to a cool start and did not seem to handle the ball well with frozen fingers. Tries to Thomas Young (2) Isaak Johnson (1) Toby White (1) Final Score 40-16 to Guyra. The 10’s also struggled with the cooler weather and were not able to handle the ball and had to try to defend the line for most of the game. Final Score 44 – 0 to Guyra.

Next weekend sees Bingara take on Glen Innes AT HOME for the Orange Festival. The 12’s are coming off a great game this weekend and the 16’s are back in action after 4 weeks off.  It should be a good weekend of footy. So, if you are around the magnificent Gwydir Oval on the weekend, whether you are here visiting for the 150th Celebrations, Orange Festival or a local, come along and support the Bingara Bullets Minor League.   Game times are as follows:

The Canteen will be open early and tickets are still available for your chance to win an ARL Footy Jersey – raffle to be drawn at half time during the 16’s game. 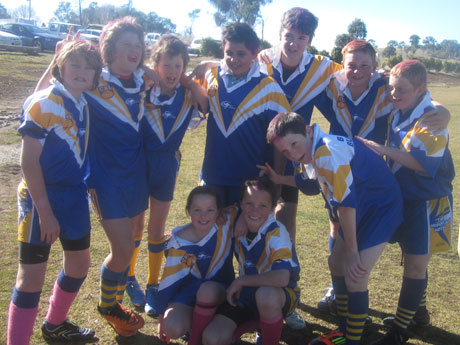