AWARD-winning sculptor Kerry Cannon, of Ceramic Break Sculptor Park in northern NSW, has returned home from Italy with a prestigious award for his bronze work.

The 2013 European Confederation of Art Critics Award, First Prize for Sculpture, is his second consecutive win at the Biennale of Chianciano – a festival of contemporary art.

“I feel that one day after chasing my tail around the globe, I’m going to crack it and create something that people will remember, not because it’s new or notorious, but because it’s so good it cannot be ignored,” Kerry said from the Victorian foundry where he was creating new work for Life Art and In Situ.

“Art is a journey and it’s littered with diversionary paths strewn with rejections,” he said.

“Sometimes you stop and think why you put up with the road trips from hell to deliver your sculpture then pick it up 10 days later. Or you enter a contest thinking there’s no way that you have a chance to win and then you win anyway.

One thing Kerry does differently from other sculptors is his obsession with his big project, the Ceramic Break Sculpture Park, a roadside attraction in the NSW “borderline region” – 15km from Warialda and 25km from the town of Bingara.

Most of Kerry’s creative efforts go into advancing the park, which features large bronze works, three galleries, bushwalks and viewing platforms. He creates around two sculptures a year for the park and so far there are 15 installed with a few more on the wing.

Kerry will be sharing his space at Life Art Worldwide with fellow bronze sculptor Craig MacDonald and zany drawer/painter Sir Leslie Thornton, both from Castlemaine, Victoria.

Craig is a master founder who has been casting Kerry’s and other artists work for years before committing to his own art in 2004. His work was recently on exhibit in New Zealand and Melbourne.

Self-knighted Sir Leslie is considered Castlemaine’s biggest celebrity. His drawings and paintings are captivating and challenging and while he is well-known for his abstract landscape paintings, he creates in all visual artforms, from cartoon and map drawing to installations and ceramics, using humour to express and explore emotions and ideas.

Tickets to Life Art Worldwide’s opening event on Friday, October 25, can be picked up at the door on the night. Email info@lifeartworldwide. com to book your spot for catering.

A $30 ticket includes finger food, a glass of wine or bubbly on arrival and an evening of entertainment, including an opening ceremony by tribal dancers and musicians led by Lyndon Davis, a fashion parade and an acoustic showcase. 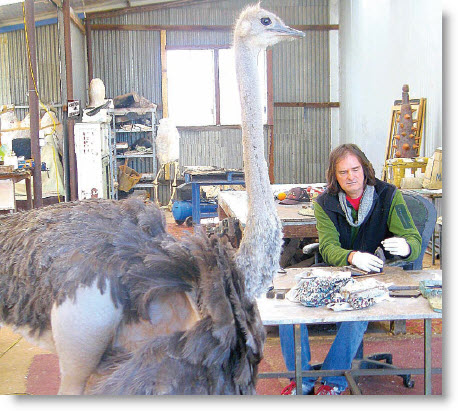 If you visit Kerry Cannon’s sculpture park, you won’t see this ostrich. She and her mate were removed because they terrorised his studio.

“They were clucky and looking for calcium to make their eggs,” he said.  They broke all my plaster moulds and then ate them. Using my tables as barriers I tried to exclude Betty and Betunia, but they crashed through and hissed their disapproval when I prodded them to get them to vamoose. They are big heavy animals and it’s frightening when one sticks its extended beak in your face.”

Finally Kerry’s assistant called a wildlife farm and a former sheep farmer took them away to where a handsome male ostrich awaited.