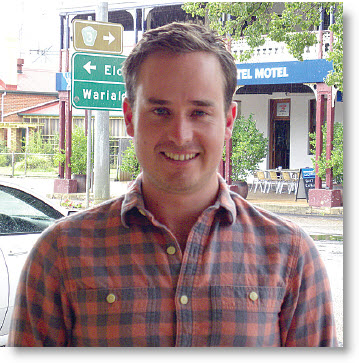 The appointment is for two years at this stage. He could also potentially be covering the Middle East and Africa as well.

Hugh, who has worked with Channel Seven since 2011, will be a video journalist, doing some of his eown camera work. He will be based at ITV, the commercial version of the BBC, working out of their news room in London.

“I will be covering almost everything that happens, such as the Commonwealth Games, the Scottish Referendum, and the Rolf Harris case,” Hugh told the Advocate.

After a Gap year spent at Loretto Senior School, just outside Edinburgh, Scotland, Hugh studied at Charles Sturt University, Bathurst, achieving a Batchelor of Communications. In his second year, he worked at radio station 2BS, then in third year, started at Prime in Orange, part time odd jobs for people, helping put together the news bulletin, then got job as journalist.

“By the time I left in 2011, I was the news editor and presenter for Central West Prime” Hugh said.

Hugh is also looking forward to meeting up with his brother, Will, who is studying for a Masters degree in Environmental Psychology at the University of Surrey.