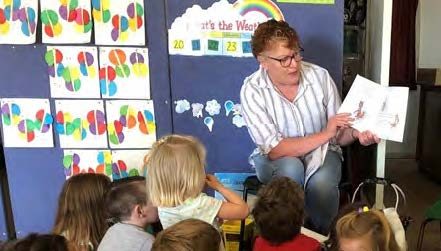 Fiona entertained the children with renditions of her stories, which the children thoroughly enjoyed. They asked her to read the three published stories as well as the story she is about to get published, which should be in bookstores by Christmas.

Fiona taught the children some of the noises that chickens make. For example: when they lay an egg, scratch in the yard or find a worm. 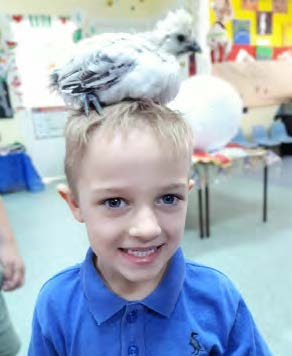 One of the highlights of the visit was Fiona teaching the children to draw her book’s characters. She explained that chickens do not normally show facial expression, so she learned to draw her own characters.

A previous book that she had published had been illustrated by overseas artists and Fiona explained the difficulties of trying to get the picture that she had in her mind translated into the drawings.

Order forms for the Adventures of Chook, Chick and Cackles can be found at Bingara Preschool, Gravesend Clubhouse, Gravesend Hotel and Gravesend Public School.  The book series retail for $15.00 each or $8.50 for the colouring in book.

As part of the entertainment, three chickens travelled with Fiona to give the children a “hands on” experience. The chickens were well received and Nathan Rowlinson of Bingara Preschool was brave enough to let Chick of Chook, Chick and Cackles fame, sit on his head.