BingaraLatest NewsGeneralChristmas Carnival lights Bingara up for the festive season

Christmas Carnival lights Bingara up for the festive season

Their singing could be heard all the way up the main street of Bingara as the children of the community gathered together, singing Christmas carols while decorating the trees lined outside the business houses in Bingara.

An array of colour can now be seen as you drive down Maitland Street and standing tall in Fays Park is a massive Christmas tree, which at night, is lit up with Christmas lights. The tree decorating was part of the Community Christmas Carnival held last Thursday night, which was very well attended despite downpours of rain earlier in the day threatening to cancel the entire event.

The Library Book Club and Toy Library presented an evening of fun for children of all ages including tree decorating, carolling and, while they waited on the special guest, Santa Claus, Kyra Beesley and Kim Apthorpe entertained the children as the two naughty elves sending the children into a frenzy of excitement.

Santa had a mixture of responses from the children; while the smaller ones weren’t so sure about his white beard and red suit, the older children were extremely excited to see Santa and let him know what they all wanted for Christmas.

While the children were entertained by Santa, the rest of the community set about checking out the various stalls lining parts of the street and tasting some of the food which was being sold inside and outside the Roxy Café.

Later, the Bingara Lions Club’s ‘Carols by Candlelight’ attracted the crowd inside the Roxy for an evening of entertainment from various artists around the region. Tahlia Stevens (Chook) from Warialda started the show off with some Taylor Swift and the classic Christmas Carol, ‘Santa Claus is coming to Town’.

Ally and Tori Dixon next entertained the crowd with their instrumental performance of clarinet and saxophone, playing three Christmas songs, ‘Silent Night’, ‘Deck the Halls’ and ‘Joy to the World’. The crowd then pleasantly welcomed the deep country voice of Jamie Wilson as he put his own swing on the classic ‘White Christmas’ carol and sang a Tim McGraw song.

Maddie Rose from Warialda took to the stage performing Dixie Chick’s ‘Wide Open Spaces’ and ‘Amazing Grace.’ Luke Turner from Inverell pleased the crowd with his amazing guitar playing skills while Rick Hutton brought to his performance a self written song “The Gwydir Ferry’ and sang another about Christmas in Australia.

The Inverell family band, ‘LJ and the M and Ms’ wowed the crowd with a musical performance and Mikaela Mephan followed with a solo on her saxophone. The duo of Doug Mather on guitar and Mel Baggs as vocalist brought together a beautiful collection of songs including the ever popular Christmas carol, ‘Silent Night.’

The concert was concluded with Peter Kadey who was also the MC for the night, singing a Lonestar piece, ‘Broken Road’, he then concluded with an upbeat classic, ‘Jingle Bell Rock’ which got the crowd singing along with him.

Making sure everything ran smoothly was Tracey Carr who was very pleased with how the concert came together. “Each performer has their own unique act and it’s great how they’ve all come together as a show tonight,” she said. “Even with the wet weather it is great to see there was still a fair sized crowd.” 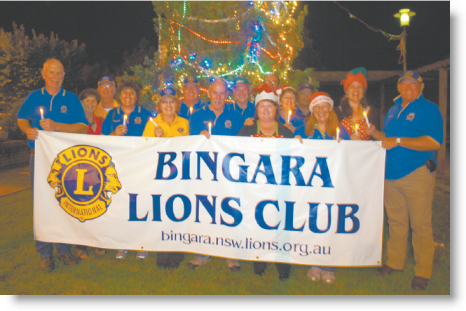 The Bingara Lions Club with the Bingara NAB Bank as co-sponsors brought together ‘Carols by Candlelight’, a night of entertainment for the community followed by a grand finale of lighting the big Christmas tree in Fays Park.

The Finale of the carnival came when the huge Christmas tree in Fays Park was lit up with Christmas lights for the whole community to see. The Christmas tree will continue to be lit up until after Christmas. The Lions club were very pleased with how the community supported the event. 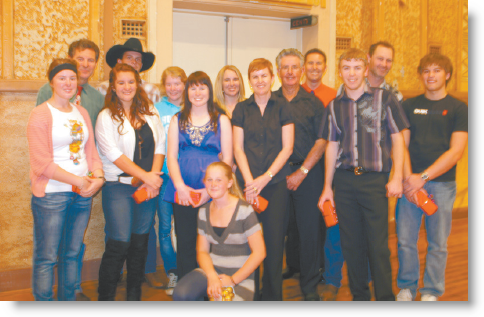