An estimated crowd of 750 people gathered on Gwydir Oval at Bingara last Thursday night for a Christmas Carnival with a difference, and they were not disappointed. 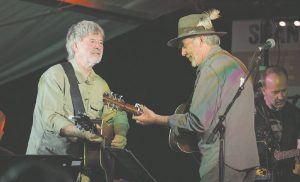 John Schumann and Shane Howard on stage at the ‘Concert for the Farmers’.

Chairman of Bingara and District Vision 2020, John Bishton, had the privilege of introducing Aussie rock legends, John Schmann from ‘Redgum’, and Shane Howard from ‘Goanna’, with support performances from Bingara performer, Tash Cooper, and the Bingara Preschool and Bingara Central School.

Marketted as a ‘Concert for the Farmers’, it was really for the whole community which is, after all, affected by the drought. Buses from Barraba and from Upper Horton helped swell numbers, as well as people who drove from other surrounding towns. Mr. Bishton was very pleased with the attendance.

Andrew Farris, former guitarist with INXS and experienced crowdcounter, who now lives near Barraba, attended the concert and estimated the crowd to be about 750.

Santa made an appearance during the early part of the evening, delivering gifts for the children on behalf of Melissa Zwiep from the Macleay Toy Run. Stall holders who usually line Maitland Street for the Christmas Carnival had no problem setting up at Gwydir Oval instead.

Gwydir Shire Council’s Special Events committee was impressed with the success of the evening. “It was great to see all the locals come out and support the event,” Council’s Marketing and Promotions Team Leader Georgia Standerwick said. “The community spirit was alive that night, it makes you feel proud to be a part of a community like Bingara,” she said. Ms Standerwick said she had received many positive comments from people who had attended the concert. “We would love to do it every year, but we were heavily funded for the event, and they do cost a lot of money. What the performers charged was nowhere what they would normally charge.

Mr. Bishton also said he was keen to see a similar event in the future, but is uncertain about what format a future concert would take.