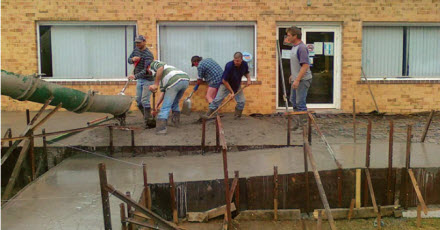 A verandah on the southern and eastern sides of the club will be constructed which will encompass a smoking area and also provide access for the disabled. The sale of a poker machine licence and monies raised from the New Year campdraft have gone towards funding the additions, which will increase the size of the club by 50%.

Club President, Baden McDouall said that the team of volunteers worked for fifteen and a half hours last Friday to see the concrete slab in place. Intermittent rain made conditions less than enjoyable but ensured that the concrete did not dry too quickly.

Upper Horton seems to be a great community for volunteers. Around 24 of them have been involved in the project. “Board and non-Board members helped and we even had the assistance of a Metroll representative, who used to be a concreter, staying for five hours to help with the job! He had called in to talk to someone,” Mr McDouall said.

In other developments for the tiny community of Upper Horton, a new amenities block is about to be installed near the caravan parking area beside the tennis courts and “the next thing is to start drawing more campers to the caravan park,” Mr McDouall said. The block will be finished in time for the Pony Express motor bike event which will be held on Saturday, October 22.

Mr McDouall also added that the New Year campdraft committee will again be hosting the national finals, for the second year in a row, which is quite an achievement for the organising committee.