The loyalty of the Horton Sports Club patrons would be the envy of many small clubs across regional NSW, such is the support they have received through 2020. Patrons have always been committed to the Club, which this year has run on a roster of staff and volunteers under the watchful eye of Stalwart Lyndsey Hagan.

Currently open four nights per week, down from seven prior to COVID-19, they have recently added Sunday lunchtime service in an attempt to spread the load of visitors. As a result, the Club has welcomed cook Karen Derrick, from Barraba to join Amy McKay (both pictured below) and Vicki Steiger in the kitchen. 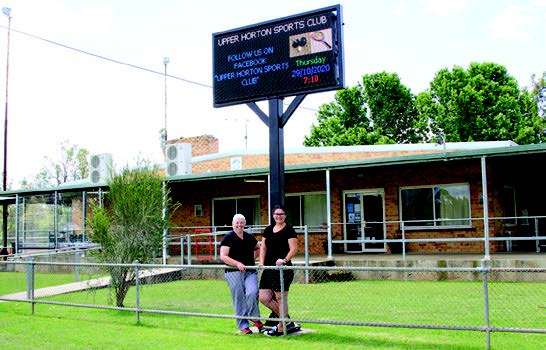 Despite restrictions easing over the past several months, the challenges of COVID-19 have remained, and new ones keep presenting themselves. For Upper Horton Sports Club, size does matter with the 4 square metre rule meaning that although the number of people per venue has been taken up to 300, their floor space means that the number of patrons they can manage is still limited.

The venue was recently granted an exemption to the State Government’s requirement to have QR-code registration for patrons due to the town’s lack of mobile reception. “Until the area per person is lifted, we will remain capped in the number of people we can have at the Club at any one time,” said Mr Hagan.  At times staff are still having to move people to seating on the verandah outside to be able to comply with regulations.

Attendance at the venue is highly variable and dependent on what events are being held in surrounding town with support coming equally from Barraba and Bingara as well as further afield from Narrabri and Moree. “We’ve had quite a few campers in with a lot of people travelling about when they can’t go anywhere else,” said Mr Hagan.

The recent announcement by the State Government that Killarney Gap Road is set to be sealed from Narrabri Road through to the township under their, Fixing Local Roads funding, is also expected to increase traffic.

Despite the difficulties of COVID-19 and the drought over the years prior, Mr Hagan says they have done their best to continue to service the community. Innovative strategies throughout the year such as a drive-through meal and drinks service during lockdown and pizza or multi-cultural nights have seen them continue on and remain well supported.

Consultation is now underway to determine the viability of hosting Upper Horton’s annual rodeo and campdraft events in early January. So, it seems the Club is a victim of its own success; a very nice problem to have in a town with just 168 residents.