BingaraLatest NewsVision 2020Community comes together with focus on future

Community comes together with focus on future

‘Community works best when people meet to plant trees beneath whose shade they will never sit!’
-Anonymous, Ancient Greece.

Perhaps the above quote, translated by guest presenter Paul Dawson, best summarised the ‘Disruption, Change and Opportunity’ Workshop held at the Roxy Theatre in Bingara last Friday. It was an all-day event with a dozen different presenters focusing on the topics of Agriculture, Finance and Business. It was an occasion to also launch the Wider Gwydir Vision 2030 Report.

‘The world is changing so fast,’ said the Workshop Moderator, Adam Blakester in his opening address, ‘How or even why should we try to predict the future?’

Adam provided these points to the guests and presenters;

Changes in these sectors can be highly disruptive. Innovation and technology will have an impact on the future sustainability of business and organisations more widely.  To respond to disruptive innovation, there is a need to embrace an innovation culture and seek out opportunities to diversify into new products, services and markets. 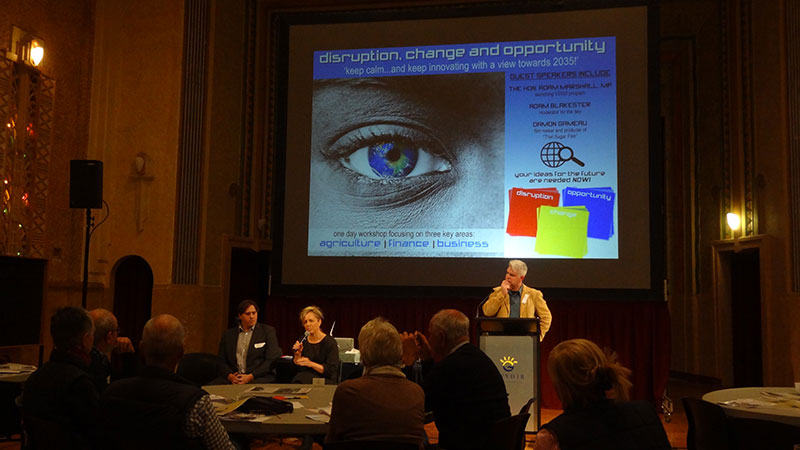 The first session of the Workshop focused on Agriculture. The three presenters were farmer and activist Glenn Morris, award winning farmer from the Liverpool Plains Kirrily Blomfield, and Back Track Manager Paul Dawson.

Glenn, on the anniversary of his famous horse ride across the Sydney Harbour Bridge, spoke of the need to make the creation of soil humus a national priority.

Kirrily spoke of regeneration and value adding in agriculture, and of diversify farming into new areas like agri-tourism.

Paul explained how the Back Track program works with disengaged kids. He said that 25% of 13 to 17 year olds are disengaged with the school system. Back Track has developed programs around agricultural skills including fencing and stock handling, and especially with working dogs. He spoke of their ‘Circle of Courage’ – Belonging, Independence, Mastery and Generosity.

The three then fronted a Panel session where the audience could ask questions and contribute ideas.

After lunch, Gwydir Shire Deputy Mayor Catherine Egan, welcomed the audience and introduced our state MP Adam Marshall. Adam launched the ‘Wider Gwydir Vision 2030’ document. He spoke of the need for “Focus on human capital” and said, “Sure (government) can provide the basics, but people make communities.”

Adam congratulated both the Gwydir community and the Gwydir Shire Council for their innovation and endeavour.

The second session was focused on Finance. Sandy McNaughton represented CWP the lead corporation developing the Sapphire Wind Farm east of Inverell. The project will provide electricity for 115,000 homes and has secured a 20 year contract to supply the ACT. A system of direct community investment is being explored to part fund this project.

Bryan Meredith heads the IT section of Rabo Bank. He spoke of the accelerating rate of technological change and the changing expectations of customers. He said that new products like the ‘Mobile wallet’ and ‘Artificial Intelligence impacts, will make the Finances of tomorrow markedly different. He warned that legislation will need to keep up with these changes and said that “More data means more responsibility for banks and for governments.”

Anna is the Managing Director of Wentworth Travel a high end travel agency with 16 staff members across several countries. Anna manages her company from the family farm ‘Yarrandabbie’ between Barraba and Bingara. Despite the problems with communications she rates the benefits of a “community network, large pool of committed staff, the enjoyable lifestyle and no traffic!” as more than compensating.

Ralph and Jo Waters own and operate the Bethel Farm Mill in Bingara. They have made the pursuit of clean and healthy foods their priority. They have focused on organic pulses and yellow grains to provide a range of delicious food products using the latest technology and with ethical marketing.

Josh McGregor, is the MD of McGregor-Gourlay Ag Services. Based in Moree and now with branches in 15 centres the company has developed in the face on many and varied disruptions. Josh is the fourth generation of the McGregor family in this business. He told the audience that “the world wants Aussie agriculture” and that his “… biggest challenge is keeping ahead of the disruptions’. To do this they are, ‘repositioning and redefining our business to be the leaders in agri-tech.’

Sarah and Angie told the story of the 2016 ‘Unleash the Black Dog Ball’ at the Roxy in Bingara. Their detailed planning and strategic use of social media helped to make the event a sell-out, and raised in excess of $23,000. They also told of the 2017 Ball, and the planning underway.

During the breaks the guests were invited to contribute ideas around the themes and under the headings of Disruption; Change and Opportunity. The report from these will be circulated soon.

The after dinner speaker Damon Gameau is an Australian actor and film maker. His first full length film, the documentary “That Sugar …” Film has become the biggest grossing Australian Documentary to date. In an Interview Session with Adam Blakester, Damon spoke passionately about his life and his craft. He outlined his latest project “2040” an optimistic look at how our world may appear in a little over twenty years’ time.

The audience of nearly 70 people greatly appreciated Damon’s calmly critical outlook, and the relaxed efficiency he has put into his work. His latest project has been nearly two years in the planning and financing stage and he is about to set forth across the globe to film the many and varied examples suggesting an exciting “2040”.

‘Disruption, Change and Opportunity’ was a project funded by the MDB Authority, and developed from a concept initiated by the NISBN.

The event was filmed by Wombattracks and further information and feedback can be sourced through the organising committee of Glen Pereira, John Bishton, Chrissie Smyth, Philippa Morris, Adam Blakester and Rick Hutton.