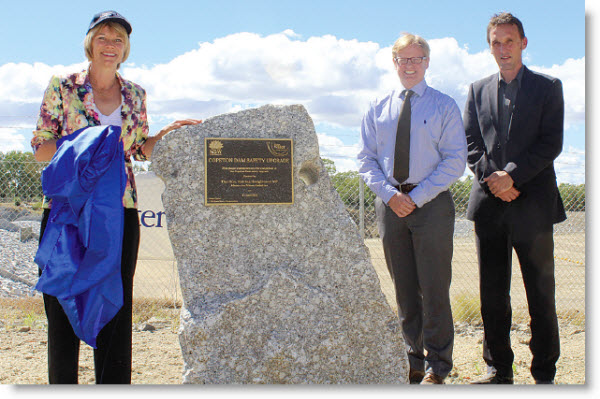 “The Copeton Dam safety upgrade was completed five months ahead of schedule, on budget, with local jobs, local involvement, and great safety and environmental records. “Not only are downstream communities now better protected from extreme floods, they have retained significant economic benefits over the duration of this project.

“The New England North West region is estimated to have retained between $15-$20 million.  Around half of the 250 people who worked on the safety upgrade were locals and 28 suppliers were from Inverell, Armidale, Tamworth and Moree.

“The community and stakeholders can be proud of their involvement during the construction of this important project. The NSW North West region has benefitted substantially from the NSW Government’s dam safety upgrade programs with more than $300 million invested in regional assets, supporting 200 local jobs and generating more than $100 million for local communities.

“It is also pleasing to see the high safety record for this project with no lost time injuries despite more than 90,000 hours of work,” Ms Hodgkinson said.

In addition to the new 250 metrewide fuse plug spillway there is also a new road and new facilities for Copeton Waters State Park.

The dam’s water level rose from 50% to 100% during construction, but careful planning and construction of a cofferdam meant there was no interruption to regular dam operations and the storage level did not impact works.