Construction on the Copeton Dam safety upgrade is continuing despite more than 400 millimetres of rain falling on the site since November 2011.  Over 600,000 cubic metres of earth and rock has been excavated and contractor Macmahon is more than one third of the way through their program. 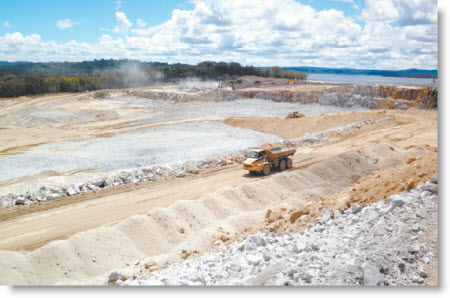 “The upgrades requiring construction close to the water level such as Copeton have had cofferdams built to ensure the construction works are not affected by the dam level,” Mr Wilson said.

The Copeton upgrade involves constructing a 250-metre-wide, fuse-plug spillway to enable the dam to withstand extreme floods by passing excess water in a staged approach.The spillway will only be triggered in very rare, extreme flood events and the project will not impact the regular operations of the dam during or after construction.

An environmental management plan is being implemented throughout the project including landscaping work after construction to restore the appearance of the site.

The wet weather has meant the bypass road around the construction site is now scheduled to be opened in early March, dependent on weather.The bypass road will feature a pull-over bay to view the works. The project is scheduled for completion in early 2013.

It really is worth taking a drive up to the dam because it looks magnificent at present, almost 100% capacity.  It’s unbelievable to think that in only June 2010 the capacity was down to 6%.