At the commencement of the meeting, councillor John Coulton congratulated the new and returning councillors on their election.

New councillors David Coulton and Frances Young were at the meeting, but councillor Tiffany Galvin was unable to attend due to a commitment made before she agreed to run for Council.

“Welcome to our new councillors, congratulations and thank you for putting up your hand for election,” he said. 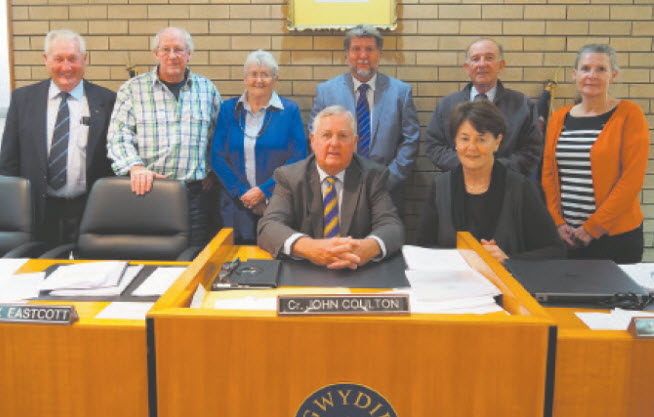 Following the recent Local Government Election, the main item on the agenda was the election of Mayor and Deputy Mayor.

General Manager Max Eastcott explained the process, and announced that following the distribution of nomination materials, only one councillor had been put forward for the role of Mayor.

“Councillor Egan has nominated councillor John Coulton, if there are any other nominations they are welcome now,” Max said.

“I must remind you that recent changes to the Local Government Act make this a two year term.”

No other nominations were put forward, and councillor John Coulton was elected unopposed.

Following his election, the Mayor took the opportunity to speak to the Council to share his thanks.

“It is a privilege to be Mayor and I take it very seriously,” he said. “Thank you for your confidence in me.  The last Council worked really well as a team and I cannot see that this will change with our new Council,” he said.

Mayor Coulton spoke of the work that the local Council has done, and reinforced that any decisions resolved will always come to fruition. “Everything we decide and resolve in this room, will happen and does happen,” he said.

“I hope you enjoy your term, I think it is a real privilege to serve your community.”

Mayor Coulton concluded by encouraging new and returning councillors to bring ideas to the table and to put forward any goals for the Council.

“Please consider what you think Council should achieve this term, and thank you all again,” he concluded. The Council were then asked if they would like a Deputy Mayor, and if so, what term should he or she serve.

It was carried unanimously that a Deputy Mayor would be elected, and would serve the same term as the Mayor.

Mayor Coulton had submitted a nomination for Cr Catherine Egan, who has served for nine of the previous 12 years as Deputy Mayor.

This was the only nomination for the position and Cr Egan was elected without protest. “It is quite humbling to be elected as a councillor,” Deputy Mayor Egan said.

“I want to thank the community and the councillors for having me back,” she said. “I would really just like to see some of our business ventures and deals come to fruition this term,” she concluded.

Following the election, a meeting cycle was decided on. Gwydir Shire Council will meet on Thursdays at 9am, with Committee Meetings held every second Thursday, and Monthly Ordinary Meetings held every fourth Wednesday. Councillors will be involved in Council inductions on October 13.