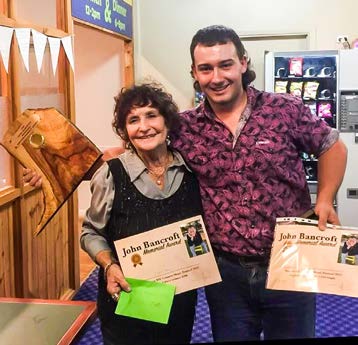 President of the Bingara RSL, Helen Cornish, says the event was more than they could have hoped for with so many visitors that an additional camping area was set up at the Bingara Showground to cope after river camping and the local caravan park reached capacity.

“We had a full backing band for the singers who played all day for the walk-up singers, before it was showtime in the evening,” said Bingara RSL Board member, Helen Cornish.

In honour of John Bancroft, a country music singer himself, well-regarded entertainer and former president of the Bingara RSL, the inaugural John Bancroft Memorial Encouragement Award was presented to Mr Zac Anthony. The award, which holds a prize of $500 and one-track recording, recognised the outstanding walk-up talent on show.

“Vanessa Patch from the Club did a terrific job to bring it all together and the board members worked very hard to make the club the right sort of venue to host the festival,” said Helen.

“We had a courtesy bus that ran between the club and camping areas and offered breakfast, as well as free tea and coffee all day. We concentrated on really making people feel welcome, and I think we did it very well.”

The brainchild of entertainer Rob Breese and the management and board of Bingara RSL, the success of the festival means the committee is hopeful that the festival will return again in the near future.