A mild, cloudy morning saw a large crowd gather early for Bingara’s Australia Day celebrations at the Historical Museum. Breakfast was efficiently provided by the Bingara Lions Club, which was very well represented, while Tony and Helen Cornish entertained the crowd with their gentle country music. 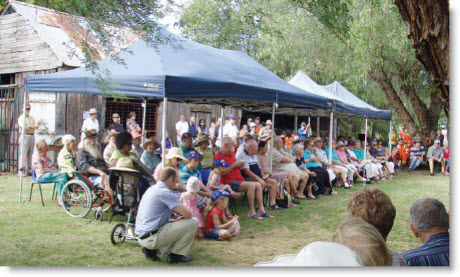 Part of the audience at the Museum on Australia Day. The shade was erected by SES members who, like The Lions Club, play an important role every year in the Australia Day celebrations.

Master of Ceremonies, Linda McDouall then invited Bingara’s new Anglican Minister, Reverend David Swan to give the Prayer for the Nation. Prior to the prayer, Rev Swan said he was very grateful for the warm welcome he and his family had received from the people of Bingara.

Councillor Egan said that “It’s where we live that makes everything great. We live in a beautiful place. The world is beautiful, but this is the best.” Cr Egan went on to say that she believes Bingara is a great place to raise a family and to grow old. 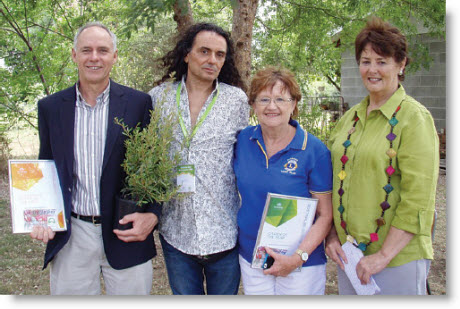 In anticipation of the announcement of the Citizens of the Year, Cr Egan said that there had been a number of nominations for the various awards. She encouraged everyone present to become involved, saying “Bingara and indeed the nation, thrive from the work of volunteers. If you have some spare time, join any of the many organisations in town and become a volunteer. There is no reason to be bored or to say you have nothing to do,” she said.

After some more songs from the Tony and Helen Cornish, including John Williamson’s “Raining on the Rock”, MC Mrs McDouall invited Ally and Ellen to describe what they liked about Bingara. Both girls mentioned the friendliness of the town, the many opportunities they had been offered throughout their schooling and the benefits of living in a country town.

Mrs McDouall then introduced Jose Calarco, a man of many talents who can not only direct, produce, choreograph, play and sing but also organise the finances. Mrs McDouall suggested he was a prime candidate for abduction by some of the town’s organisations!

Currently Director of Descendance Aboriginal and Torres Strait Islander Dance Theatre, Jose was born in Argentina of Italian parents, the family immigrating to Australia when he was a child. He has performed in more than 40 countries, including Russia, Croatia and Serbia, promoting Australia through cultural shows. (“We have toured more countries than Kylie Minogue”, Jose told the Advocate.)

Mrs McDouall said Jose had met the Queen and the Dalai Lama and “today he is meeting the people of Bingara.”

Mr Calarco began his address by saying that it was an honour to be the 23rd ambassador to Bingara, going on to say “There is saying and there is doing. In the country, you guys are doers. In the city, we’re just big talk! Unfortunately, in Sydney we’re just operating on talk and intention.”

Jose gave the gathering an insight into his origins and his early working life, which began in the family’s fruit and “veg” shop, describing how he came to his present position with the dance company. He made mention of the many countries its members had visited and the famous people for whom the company had performed.

He described meeting the Dalai Lama, who said he was a good didgeridoo player. After hearing him play, Jose said he politely advised “Stick to religion, sir.”

In closing, Mr Calarco said that 180 nationalities make up Australia. “We are branches from the same tree. We’re all the same… Keep up the good work here, work together and never be selfish. Always think of the other".

The final part of the ceremony was the announcement of the awards.

The 150th Anniversary of Education in Bingara won the Event of the Year. Bingara Central School Principal, Mark Vale accepted the award on behalf of all those involved in the weekend, acknowledging “the team effort of the staff to make the event the success it was.”

Big River Dreaming, written and produced by Rick Hutton, was also mentioned by both Cr Egan and Mr Vale as a very successful event in 2012, Mr Vale again acknowledging the support of school staff and students “which saw excellence can be achieved.” 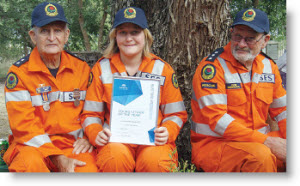 Jaime-Rae Thomas was announced as the Young Citizen of the Year for her commitment to the SES.

Citizen of the Year Award went to Janice Miller for her involvement with a number of organisations in Bingara, but particularly for the role she played in preparations for the school’s 150th anniversary celebrations.

Both awardees were extremely surprised to hear their names announced.