If there are a few women discussing hot flushes and night sweats in Bingara this week, then Menopause the Musical is to blame. The Roxy theatre was yet again a sell out for both the matinee and the evening performances.

More than 600 patrons brought people from neighbouring towns including Inverell, Moree, Warialda and Barraba. One patron, who had enjoyed the show in Sydney, came to the performance at the Roxy, encouraging her friends from Inverell to accompany her. 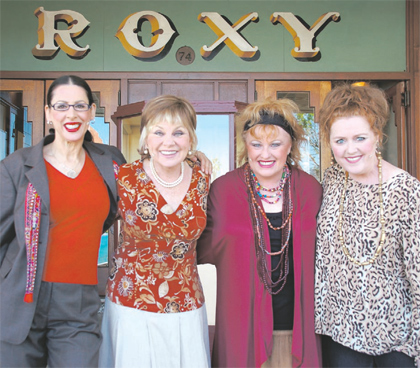 The hilarious cast of Menopause

Simply set in a department store, a group of four women visited different ‘floors’ which provided the prompts for discussing different aspects of the ‘change of life’. Starting with the song ‘Change’, the show quickly had the audience listening carefully to the words of the 60s, 70s and 80s hits like ‘YMCA’, ‘Bill’, ‘Fever’, ‘Heat Wave’ and many more, which had been cleverly reworded to raise issues like medications, hot flushes, weak bladders, weight gain, lack of sleep and memory lapses.

Several costume changes provided more opportunities to discuss the subject, with one scene depicting a workout to the tune of ‘Physical’ ending up with a call for hospital and ambulances! The four talented actresses had the audience laughing uproariously for the whole performance, before coming to a glamorous finale.

Everyone was urged to join in singing the chorus of the final song, while being urged to join the cast on stage for a show of solidarity and joy. ‘The best show ever held at The Roxy’ and ‘The funniest show I have ever seen’ are just some of the comments heard after each performance.

The wonderful cast and crew very much enjoyed their time in Bingara, stating that their stay here was one of the highlights of their tour. This was remarkable feedback, given that Menopause has been touring the country for the past eighteen months, and has travelled across the country to deliver more than 380 shows.